Non-typhoidal Salmonella, as the term suggests, are Salmonella species other than the exclusively human-adapted Salmonella spp. that cause enteric (i.e. typhoid and paratyphoid) fever. The former tend to cause gastroenteritis for the large part, although they may also cause severe infections in immunocompromised persons, including in the very young and elderly.

The U.S. Food and Drug Administration explicitly recommends keeping reptiles and amphibians out of the homes of those with children under the age of 5 years, the elderly, or the immunocompromised (although it can be a bit difficult to get rid of the common house gecko in Singapore). The U.K. recommendations are a bit more measured, with a list of precautions to minimise the risks of infection.

I keep a couple of Red-Eared Slider terrapins at home and decided to see how much of a health risk they were. The chief blogger of 10minus6cosm did not require much persuasion to help out.

Samples of the terrapins’ faecal-laden overnight water were plated on Salmonella-Shigella agar and incubated overnight. Unsurprisingly, a large number of beautiful bacterial colonies appeared (many thanks to @10minus6cosm for the photos below), but thankfully none were Salmonella spp. The majority of the black colonies were either other environmental bacteria or Enterobacter spp. (although carbapenem resistance was not tested for). 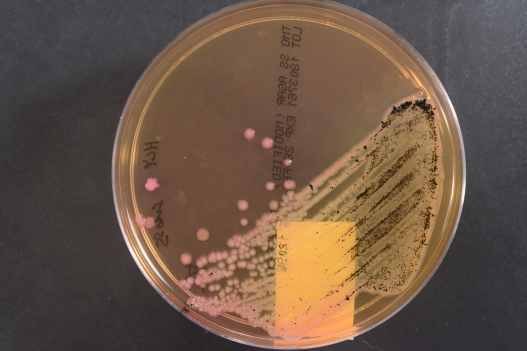 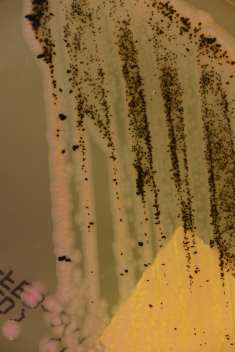 Still, terrapins may only intermittently shed Salmonella spp. in their stool, and many terrapin and turtle owners will probably not have the means to test their pets for Salmonella carriage. It is best to at least follow the recommendations provided by the British Chelonia Group, which can be found here.