Finally attempting to complete this series after a long hiatus.

Fungal infections are common in patients with prolonged neutropenia (and therefore predominantly in patients with malignant haematological conditions or after allogeneic stem cell transplantation), and were present in a significant propotion of patients with acute leukaemia in various historical autopsy series. These infections are conventionally divided into yeast (virtually always Candida spp. with occasional occurrence of Trichosporon spp. or Cryptococcus spp.) and mould (the vast majority Aspergillus spp.; infrequently mucormycosis or fusariosis or other rare mould) infections. The former are easier to diagnose and treat, but result in far higher mortality (approximately 40% to 50% on average). The latter are generally associated with lower mortality if treatment can be afforded (20% to 30%), but are far harder to diagnose because cultures are typically negative (or contaminated).

In the context of febrile neutropenia, it is important, at least initially to follow a clinical algorithm that factors in local data/epidemiology for the diagnosis and management of invasive fungal disease (IFD). This difficulty in achieving certainty in diagnosing fungal infections, the need to consider starting antifungal prophylaxis prior to development of neutropenia, and starting antifungal therapy early or maintaining therapy despite the lack of certainty of diagnosis, is the current clinical paradigm, which has led to the formulation of unique criteria for classifying the different stages of certainty with regards to IFD. These are elaborated in great detail and clarity in the EORTC/MSG:

Who is at risk for IFD? Livio Pagano and colleagues wrote a review back in 2011 that generally still holds true for mould infections, and is summarised in the figure below. 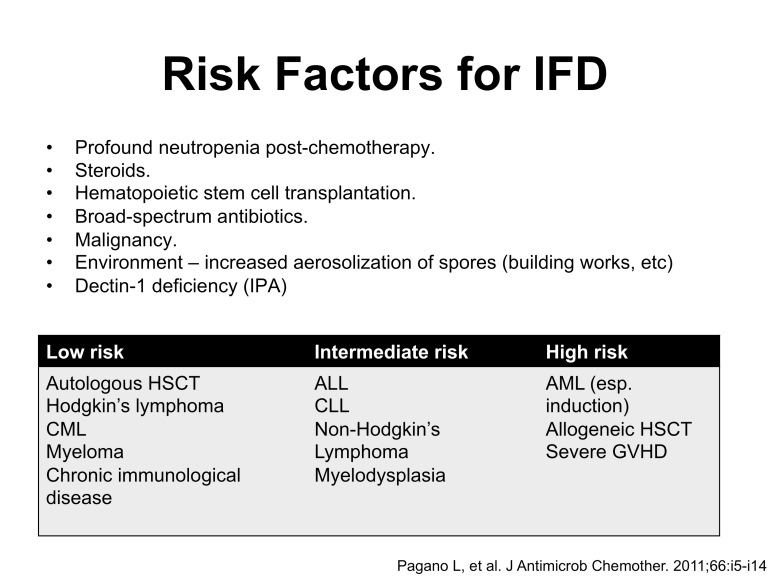 Given the difficulty in diagnosing IFD, costs of treatment, and morbidity/mortality associated with infection, it makes sense to have a routine practice of antifungal prophylaxis, especially for patients at intermediate or high risk of IFD. The current best antifungal drug for this purpose is posaconazole, with proven IFD risk reduction of approximately 50%-75% and even survival benefit in patients on induction chemotherapy for acute myeloid leukemia (AML) or severe graft-versus-host-disease (GVHD). The availability of oral delayed-release posaconazole tablets obviates some of the administration issues with the older suspension form (i.e. need for high fat diet and avoidance of proton pump inhibitors, among others), but the issue of adequate absorption in patients with severe mucositis and/or vomiting/diarrhoea post-chemotherapy will remain until the intravenous formulation becomes available next year.

The benefit of posaconazole prophylaxis in patients at intermediate risk of IFD is less well-studied, and here, local epidemiology may well make a difference in its consideration. However, it is important to note that posaconazole (as well as itraconazole, voriconazole and even fluconazole) will potentiate vincristine toxicity, preventing its use in patients with acute lymphoblastic leukemia (ALL) for example.

In the local setting, oral suspension posaconazole was shown to be useful in reducing the incidence of IFD in both public sector institutions providing AML treatment and HSCT (paper behind a paywall). But it has created interesting clinical conundrums in the management of patients with persistent febrile neutropenia, which will be elaborated in the next (and final) segment of this series.