It has been more than two weeks since the story first broke on mainstream media. More than a hundred additional cases have been linked to the durian pastry outbreak (bringing the total to at least 183 cases), while the Goodwood Park Hotel bakery remains suspended. The initial investigation was reportedly performed from 4th April (i.e. more than a month ago). Curiously, the causative agent has not been identified. I find it surprising that after investigating 183 cases over a month, this is still not known. Perhaps it is known, but the journalists did not ask? In any case, there have reportedly been no deaths, suggesting relatively mild gastroenteritis. The usual causative agents for such huge outbreaks are viruses (i.e. norovirus). Other less common causes include pathogenic bacteria such as non-typhoidal Salmonella, and preformed toxins from bacteria such as Staphylococcus aureus or Bacillus cereus.

Last year, there were more than 2,000 persons who fell sick after consuming durian candies in Caraga, Philippines. The outbreak was caused by toxin-producing S. aureus in the candies. 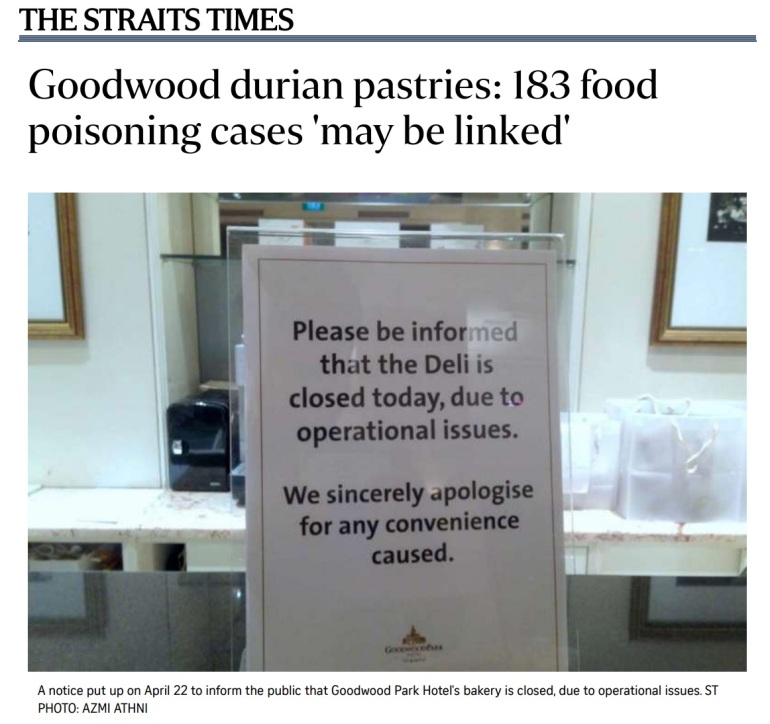 Screen capture of the online Straits Times report of the Goodwood durian pastry outbreak on 6th May 2016.