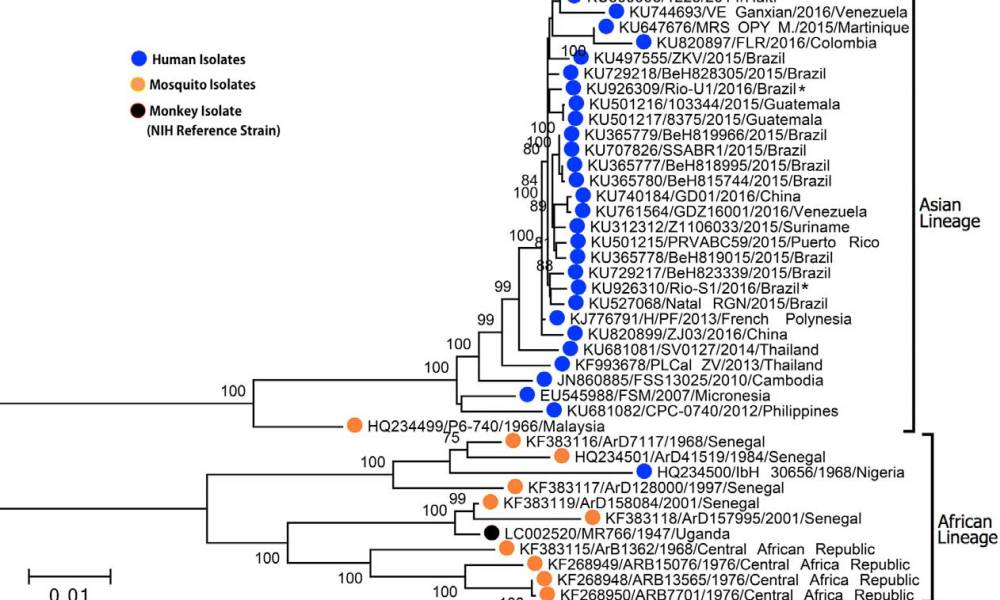 The Ministry of Health Singapore (MOH) released a joint statement last night that included a short statement about the sequencing results of the viruses obtained from two patients from Sim’s Drive. What was of interest was the claim that “the (local) virus belongs to the Asian lineage and likely evolved from the strain that was already circulating in Southeast Asia. The virus from these two patients was not imported from South America.” The research team from the National Public Health Laboratory and A*STAR’s Bioinformatics Institute promised to release more information shortly.

One of the most common questions that I have been asked (and probably other local infectious diseases physicians and microbiologists as well) is whether the virus causing the outbreak in Singapore was “Asian or Brazil”. The underlying relationships of Zika viruses are actually a little bit more complex, and is very clearly explained in this excellent review by Didier Musso and Duane Gubler that was published in Clinical Microbiology Reviews just in July this year. I include below a figure of Zika relationships (a phylogenetic tree derived from sequencing viral genetic sequences) from a paper published in May this year in Cell Host & Microbe based on work done by scientists from the University of California Los Angeles working together with colleagues from Brazil and China. 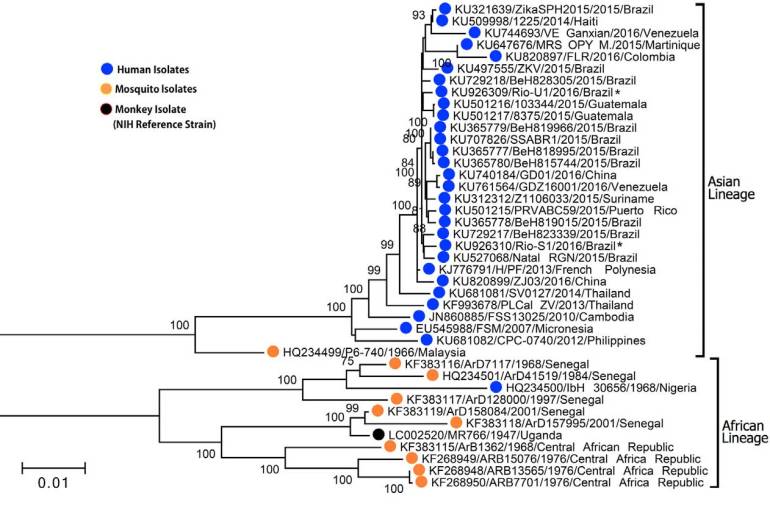 Part of Figure 1 from the paper “From Mosquitos to Humans: Genetic Evolution of Zika Virus” published in Cell Host & MIcrobe in May 2016

In brief then, what is currently hypothesised based on analysis of Zika genetic sequences is that the virus probably emerged in East Africa (possibly Uganda, where it was first found), and then spread around Africa (there are currently two major groups or “clades” circulating in Africa). The Zika virus was somehow transported to Asia in the 1940s and then successfully spread around Asia, evolving separately from their African ancestors and forming a separate “Asian lineage” as opposed to the original “African lineage” (think of it as akin to the different Darwin’s finches on various Galapagos islands). The earliest “Asian” Zika virus was isolated from Aedes aegypti in 1966 in Malaysia, but it is unclear why the virus did not spread more explosively throughout Malaysia at that time.

Then there were two separate epidemic clades of “Asian Zika” that emerged, first to Micronesia, and secondly to French Polynesia. These are considered separate introductions from Asia, rather than the more intuitive spread from Micronesia to French Polynesia, because the virus that was isolated in French Polynesia is actually more closely related to a Zika virus isolated in Cambodia than the virus circulating in the Micronesian island of Yap (this can be seen if one peers closely enough at the figure above). The virus circulating in French Polynesia then spread to Brazil and hence to the rest of South America. So the virus causing outbreaks in Yap, French Polynesia, Brazil, rest of Latin America, and Florida is part of the Asian lineage of Zika. What the MOH report suggests is that the virus now circulating in Singapore is more closely related to viruses sequenced from the rest of Southeast Asia (Philippines, Thailand, Malaysia, etc as in the figure above) than to the French Polynesia-Brazilian clade of viruses. But all are still part of what is currently called the “Asian lineage” of Zika.

This is very interesting academically and from the point of understanding Zika global transmission but does it make a difference with regards to Zika-related complications such as Guilain-Barre syndrome and microcephaly? Very probably not.