The Zika epidemic in Singapore appears to be progressing towards endemicity. As of yesterday, there are 387 confirmed cases, with 9 clusters.

Zika clusters in Singapore, a screenshot from the NEA website last updated on 23 September

Among the confirmed cases are 16 pregnant women, and the Ministry of Health has announced plans to set up a national surveillance programme to monitor the development of babies born to these and other Zika-infected pregnant women in Singapore.

The number of Zika notifications has dropped over the past week, but this may be due to both less intense testing as well as the recent ongoing heavy rainfall – dengue notifications have similarly fallen. Initial aggressive mosquito control measures are likely to have also contributed significantly.

Even as outbreak activities have quietened down, academic activities related to Zika have heated up. The initial publications have already appeared, with a piece on Zika genomics in Eurosurveillance. Investigators from the National Public Health Laboratory and Bioinformatics Institute showed that the primary virus causing the epidemic in Singapore is closely related to viruses circulating in Thailand, and precedes the French Polynesia-Brazil-Latin America clade. 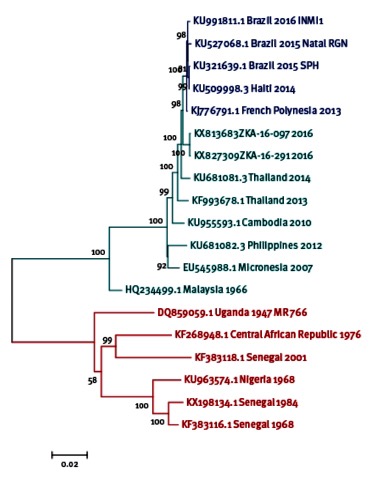 Screenshot from the Eurosurveillance article. The Singapore viruses are 6th and 7th on the tree, counting from the top.

There are two more general articles at this time: a letter in Lancet on migrant workers’ health (the epicenter of our Zika outbreak was in a construction site) by School of Public Health academic staff, and an editorial in the Singapore Medical Journal which I reviewed and decided to let pass despite certai  logic gaps and flawed assumptions – there are still several useful points.

We can probably expect more publications in the near future. I am starting to re-think through the issues of academic publishing and outbreaks. There are inherent issues with the current model of academia that are well known, including the impact factor chase, over-rewarding of “novelty”, and excessive importance attached to authorship positions. All of which appear to be magnified and to create negative incentives for thorough collaborative academic work in the setting of epidemics.