The World Health Organization (WHO) published its first ever list of drug-resistant bacteria for which new antibiotics are urgently needed 2 days ago.

Screenshot of the WHO page on list of drug-resistant pathogens

The list is divided into 3 priority categories: “critical”, “high” and “medium”, based on a series of criteria that included (and I quote ad verbatim) “how deadly the infections they cause are; whether their treatment requires long hospital stays; how frequently they are resistant to existing antibiotics when people in communities catch them; how easily they spread between animals, from animals to humans, and from person to person; whether they can be prevented (e.g. through good hygiene and vaccination); how many treatment options remain; and whether new antibiotics to treat them are already in the R&D pipeline“. 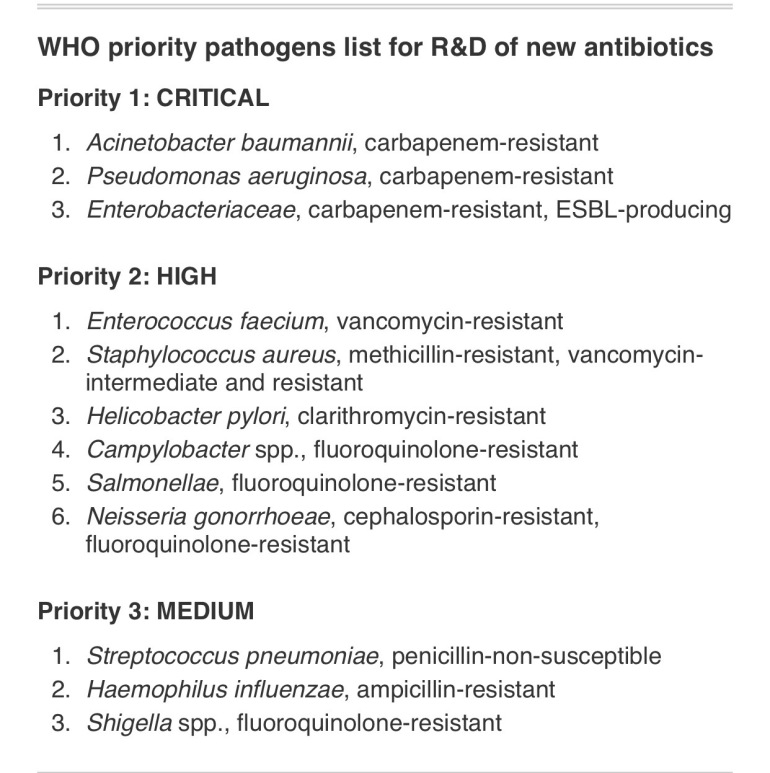 Methicillin-resistant Staphylococcus aureus (MRSA), the original “superbug”, is not on the “Critical” list anymore as there are now many new antibiotics that can be used to treat infections caused by it – the drugs are just expensive and are likely to be inaccessible to patients in many of the poorer parts of the world. The situation is similar for most of the other pathogens listed on the “High” and “Medium” priority categories; in some cases, such as for the fluoroquinolone-resistant bacteria, there are actually inexpensive antibiotics available, but other factors come into play as these pathogens mostly cause community-associated infections and having to use injectable antibiotics will complicate treatment practices. However, the sheer volume of infections caused by any of these bacteria exceeds by far those caused by carbapenem-resistant A. baumannii or P. aeruginosa.

What would a similar list specific to Singapore look like? I think there would be no arguments about the “Critical” category, except that the order might be rearranged:

ESBL-positive Enterobacteriaceae would drop down to a “High” priority category. We do not have many treatment/management issues with fluoroquinolone-resistant Salmonella spp., Campylobacter, or Shigella. Many of these bacteria are important from the issue of food safety, however. Ampicillin-resistant Haemophilus influenzae does not register on my consciousness (in part because I am inured to the issue, and ampicillin resistance seems quaint in the Singapore hospital context).