Like many, I marvelled at the scope and ambition of the Hospital Microbiome Project, which is a large-scale longitudinal study of the microbial ecology of the Center for Care and Discovery (a hospital belonging to the University of Chicago), beginning from 2 months before the hospital’s opening in 2013 and stopping only 1 year afterwards. The first paper from that study was just published a week ago in Science Translational Medicine (behind a paywall), and what a remarkable paper it is.

During the study period, the researchers had collected 6,523 samples from multiple sites (including the air, the inpatients, and the nurses) in 2 nursing stations and 10 inpatient rooms from the surgical and haematology/oncology floors. All sites were sampled weekly, except for 1 inpatient room on each floor (and presumably the patients within these rooms and the nursing staff taking care of them) which were sampled daily. These samples underwent amplicon sequencing (16S) to identify the microbial communities and their relative abundance. A limited amount of patient clinical data was also collected, including antibiotic and chemotherapy exposure.

The published results, probably representing only a fraction of the overall work of the project, were fascinating. Some of the more interesting results are as follows: when the hospital wing became operational, there was a shift in the environmental microbiome with a reduction in abundance of Acinetobacter spp. and Pseudomonas spp., which were replaced by skin flora such as Staphylococcus spp., Corynebacterium spp., and Streptococcus spp.

Screenshot of part of a figure from the Science Translational Medicine publication, showing the change in environmental microbial abundance pre- and post-hospital opening.

As might be expected, the microbial communities on patient skin and hospital room surfaces became increasingly similar over the course of the inpatient stay. Unfortunately, the researchers only analysed Day 0 and Day 1 (of hospitalisation) data for inpatients, showing that inpatients were initially colonised by the room microbial communities, but the direction of microbial transmission reversed after staying overnight. This has interesting implications, suggesting that – at least for this hospital – the environmental microbes were less fit than the microbes brought in by the patients, and were out-competed after a day. This does not support the belief of many of us who feel that the hospital environment contributes pathogenic microbes that can cause hospital-acquired infections in patients (more below). The hands of nurses were more similar to hospital surfaces in terms of microbial communities than to patients (suggesting that these nurses were likely very compliant with hand hygiene!). 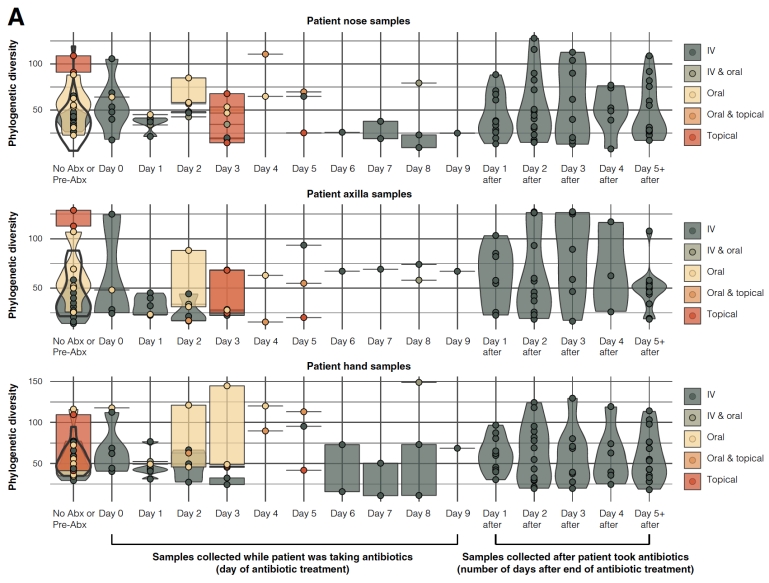 Screenshot of a figure from the paper. Violin plots showing no significant changes in the alpha-diversity of skin microbial communities upon antibiotic exposure.

Rather disappointingly, the researchers did not find any common transmission paths (i.e. sink to hands of staff to patients, etc) for the two rooms that were surveyed intensively, but this might be because of the limited sample size (n = 2). In an interview reported on Genome Web (but not in the actual paper itself), Dr Jack Gilbert – a professor of surgery and lead author of the paper – also revealed that the researchers could not find any correlation between exchange of microbes between inpatients and their environment and the risk of a subsequent hospital-acquired infection.

Overall, an intriguing and fascinating observational study that lends considerable insight into the hospital microbial ecology. Certainly worthy of repeating in a tropical hospital in addition to other follow-up studies and trials. Further publications from this project are likely and will be very welcome.