It has been 9 days since the Bangladeshi worker who died of diphtheria was hospitalised at Khoo Teck Puat Hospital (KTPH), so technically we are more or less at the end of one incubation cycle (the usual incubation period for diphtheria is 2-5 days, with a range of up to 10 days). The Ministry of Health’s press release stated that the unfortunate index case very likely acquired this infection while in Singapore, and that the last locally acquired and imported cases were in 1992 and 1996 respectively.

This case gave rise to several nagging (but not very practically important) questions:

It turns out that there are no easy answers to any of these questions, or at least, no answers that can be found within a single, easily digestible review article. There also appears to be a dearth of diphtheria research (or at least published research) recently, likely because the vaccine has been so effective. There was a lot of work done by scientists from the U.S.S.R. from the 1960s to 2000s, much of it published in the Russian language Zhurnal Mikrobiologii Epidemiologii i Immunobiologii (817 articles on PubMed). Unfortunately, I was not able to read the actual articles.

After widespread acceptance of germ theory and development of microbiological techniques that could culture and identify C. diphtheriae, researchers discovered that a significant proportion of the population harboured this organism asymptomatically (i.e. a carrier state) in their throats or noses during the early- to mid-1900s. A Dr W.H. Kellogg, who was probably the Director of the Bureau of Communicable Diseases of the California State Board of Health, reported in an article published in 1915 that up to 1% of healthy persons in urban communities are diphtheria carriers.

Nearer to home, Drs Chen and Puthucheary reported in the 1970s that diphtheria carriage in school children in Malaysia was approximately 7.5%, and by age 11 – despite low childhood vaccination rates of 20% – 90% of the population had developed antibodies against diphtheria according to the Schick test results.

In many countries, the rates of carriage of C. diphtheriae, especially toxigenic C. diphtheriae, fell before vaccines became available and even as vaccination campaigns were being implemented. This corresponded with a fall of clinical cases of diphtheria, most of which is rightly attributed to increased population vaccination. Here is a report on clinical diphtheria rates in the U.S.A., published by US CDC in 1985, and the screenshot figure below is telling.

Screenshot from the US CDC report on diphtheria, published in the American Journal of Public Health in 1985.

In several other countries, notably the former Soviet states, the incidence of diphtheria as well as carriage of the organism increased despite the availability of mass vaccination.

Screen capture of an abstract from PubMed – high rates of carriage of C. diphtheriae in children from U.S.S.R. despite vaccination.

An excellent article published in Emerging Infectious Diseases (EID) in 1998 reviewed the problem of diphtheria resurgence in former Soviet states following the dissolution of the U.S.S.R., speculating that a combination of increased adult susceptibility to the disease (as immunity from childhood vaccination waned) coupled with increased population shifts and disruption of central vaccination supplies as a result of post-Soviet economic crises compounded diphtheria control efforts. The spread of a particular strain of toxigenic C. diphtheria (gravis biotype) may have contributed to – or be a consequence of – the problem of diphtheria resurgence.

Here is a more detailed description of events in one such former Soviet state – Moldovia – which is well worth the read for disease epidemiology historians.

There seems to be quite a lot of old, circumstantial evidence to support the idea that diphtheria vaccination does not block acquisition and carriage of the bacterium, but primarily protects against severe disease. Other than the papers from the Eastern European countries (including the couple listed above), there are also descriptions of outbreaks from Western countries where carrier and immunisation status were checked. For example, during the 1970 diphtheria outbreak at an elementary school in Texas, the investigators found that immunised persons were just as likely to harbour C. diphtheriae, but far less likely to develop symptoms. 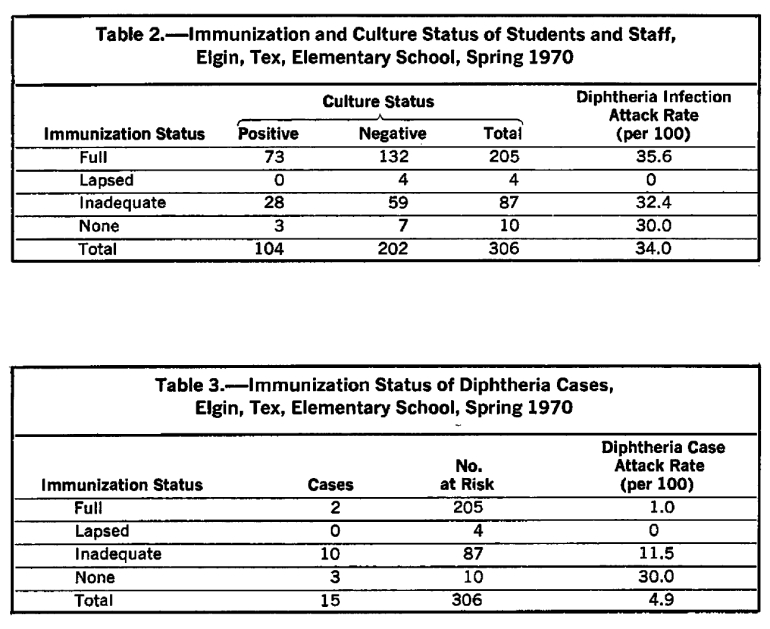 Screenshot from the paper describing the 1970 outbreak of diphtheria at an elementary school in Elgin, Texas, USA.

Diphtheria vaccination and injection of diphtheria anti-toxin (antibodies) were also tested for elimination of the diphtheria carriage state, but proved to have mixed efficacy. Again, these are old studies and the quality of both anti-toxin and vaccine relative to what we have today is uncertain, so I will not quote or reference any of the papers here.

Unfortunately, we do not seem to have published records of diphtheria carriage in Singapore, especially in recent times. The British immunologist Dr Alfred W. Frankland wrote of witnessing many cases of diphtheria as a prisoner of war in Singapore in 1942, and also of developing conjunctival and throat diphtheria himself, but there was a gap until the retired epidemiologist Prof Kee Tai Goh started publishing his work from the 1980s. Even then, none of these publications described diphtheria carriage.

The data from European countries and the U.S.A. suggest that carriage of toxigenic C. diphtheriae (and even non-toxigenic C. diphtheriae) decreased over time in association with widespread vaccination, even though – as shown above – it seems that vaccination does not prevent asymptomatic infection and carriage. In Greece for example, carriage of non-toxigenic C. diphtheriae in children dropped to 0.8% (all carriers appeared to be from a school serving a socioeconomically disadvantaged area) in the early 1980s, from 3.4% a decade ago. A larger survey of 10 European countries between 2007-2008 (looking at throat swabs obtained routinely from patients with URTIs) similarly found very low prevalence of C. diphtheriae and C. ulcerans, with positive results mainly from countries that still reported clinical diphtheria, such as Latvia and Turkey.

What about elimination of diphtheria carriage? Current guidelines for close contacts of diphtheria cases (who are technically not the same as actual carriers of the bacterium), variously recommend the use of the macrolide antibiotic erythromycin for 7-10 days  or else a single dose of intramuscular benzathine penicillin, along with diphtheria vaccination (boosters for those who had previously been vaccinated). There was quite a bit of experimentation in the past, as one can see from this old article in the American Journal of Public Health. Prior and even during the initial phase of the antibiotic era, it was shown that tonsillectomy and adenoidectomy was very effective for throat carriers, but nasal carriers were treated with either autogenous vaccines or – more effectively – with Staphylococcus aureus introduced as a competing organism (something that would be unthinkable today). The advent of antibiotics put a stop to most of the above non-antibiotic therapy for carriers. Penicillin was reasonably successful, but it was the development of erythromycin that really propelled elimination of carriage. In this study (in which the results are representative of most similar studies) published in the Annals of Internal Medicine in 1974, researchers showed that benzathine penicillin was effective in eliminating carriage in 84% of recipients, but erythromycin and clindamcyin were effective in 92% and 93% of carriers respectively. Very few studies looked at long-term effectiveness, but in those that did, re-acquisition of carriage (or failure of therapy) was indeed a problem. One study that evaluated 6 days of erythromycin therapy in 114 carriers (from the Elgin Texas outbreak mentioned above) showed that 21% “relapsed” 2 weeks later, although the study was not particularly rigorous in the sense that drug compliance was not monitored.

Summary points after a rambling write-up: