Tuberculosis at the United Nations

On 26th September, the United Nations General Assembly held its first ever High Level Meeting on Ending TB. This is the second UN General Assembly in 2 years to focus on an infectious disease issue, the earlier event being on antimicrobial resistance in 2016. One of the reasons for the meeting was that even though TB remained the leading cause of death from an infectious disease pathogen (even above HIV/AIDS), and is one of the top 10 causes of deaths worldwide, it has received less attention and funding of late compared to other diseases, and the End TB Strategy was at risk of failing to meet its 2035 goals. One other reason is the rise of drug-resistant and multidrug-resistant tuberculosis. The resulting UN political document can be read here. 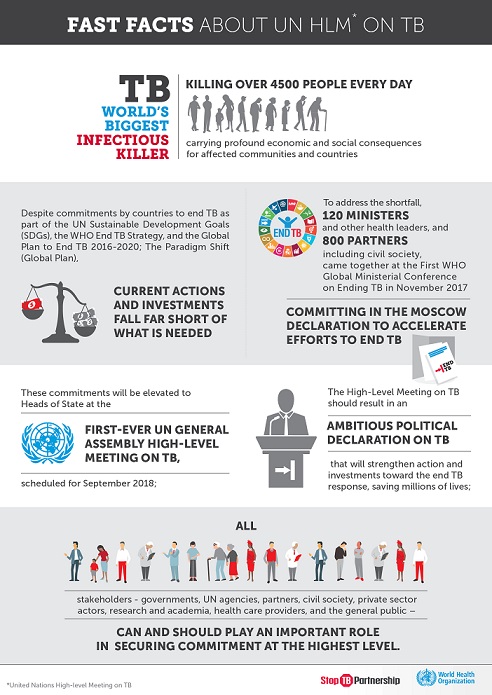 An infographic from the World Health Organization website on the UN General Assembly’s High Level Meeting on TB in 2018.

Perhaps not so coincidentally, the WHO had released its annual Global TB Report 2018 on 18th September 2018, and it makes for sober reading. There were an estimated 1.6 million deaths from TB in 2017 (approximately 300,000 from TB in HIV-coinfected persons), and although TB diagnosis had improved, approximately 36% of TB cases in 2017 remained undiagnosed. The overall trend towards TB control remains positive, as one can seen from the charts below, but perhaps the sense is that more can be done.

This, I believe, marks the dilemma for many TB experts and advocates. As the situation improves, global interest and funding declines and shifts elsewhere. But formidable challenges remain that will have to be overcome in order to continue improving on diagnosis and notification of new cases of TB, dealing with the huge latent TB problem, and reducing mortality from TB. In this context, a UN General Assembly High Level Meeting with the subsequent political declaration makes perfect sense.

The situation in Singapore is a little more complex. After several years of stagnation (in fact, with resultant rise in incidence since 2008), the number of TB cases finally dipped in 2017, as announced in March this year. Dr Lam Pin Min – Senior Minister of State for Health and Transport – also provided an update on TB in parliament in July, which is available as a video recording here. Progress is being made on several fronts, including harnessing of new technology (i.e. whole genome sequencing and rapid diagnostic tests for drug resistance), although the TB Control Unit/Singapore TB Elimination Programme also continues to grapple with many issues including delayed diagnosis of active TB in the community. Direct observed therapy (DOT), while effective, is not terribly popular despite many attempts at easing inconvenience. Several high income countries (and even some lower middle-income countries) either have no DOT programme (partly because their rates of active TB are extremely low relative to Singapore’s) or have started to trial and adopt various digital options, including asynchronous video DOT. It could be useful to try that out here as well.