A 36-year-old man from Yangon, Myanmar who had worked at a shipyard in Singapore for 2 years (without ever traveling out of Singapore during this time) presented with fever. A blood film was done for malaria which picked up the several incidental “worms”. 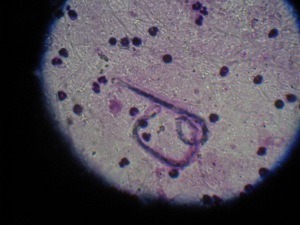 The tail of the “worm” in the blood film.

Higher resolution image of the tail of a second “worm”.

Higher resolution of the head of another “worm”.

Questions: What is the identity of the “worms” and what are the current treatment options?

This young man had lymphatic filariasis – a tropical disease caused by a limited number of parasites that are spread by the bite of a mosquito (in Asia, usually Culex or Anopheles mosquitos). The parasite in question here is Wuchereria bancrofti – one can see that the worm is sheathed and lacks tail nuclei.

Treatment used to be with diethylcarbamazine alone, with ivermectin or albendazole as alternative but less effective choices. Currently, regimens in combination with the antibacterial and anti-inflammatory drug doxycycline are very popular. Doxycycline targets the Wolbachia endosymbiont within the adult and larval worms, and may independently reduce filarial lymphedema separate from its effect on the bacterial symbiotic organism.