A middle-aged man presented with acute lymphoblastic leukemia (initial white cell count of 150,000 per cubic millimetre of blood – mostly blasts). After completing a course of hyper-CVAD, he developed persistent febrile neutropenia that was unresponsive to antibiotics. On the 6th day of fever, CT thorax was performed which was normal. On the 8th day of fever, he suddenly became drowsy and an MRI brain was performed. Sample images are shown below. 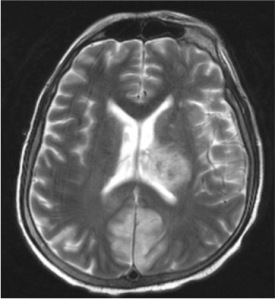 He was brought down to the intensive care unit (ICU) in view of his drowsiness and the brain lesions, and a skin lesion appeared over his face the following day. 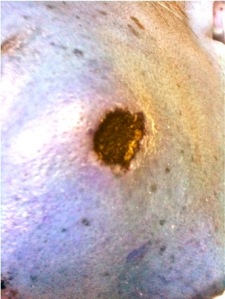 Questions: What is the likely diagnosis and what treatment should be initiated?

These constellation of features suggest an opportunistic invasive fungal disease, and its rapidity of development is consistent with mucormycosis – a fungal infection caused by the Mucorales group of fungi. The following figure is a microscopic image of the fungus (Rhizopus spp.) cultured from this patient’s sinuses and skin lesion. 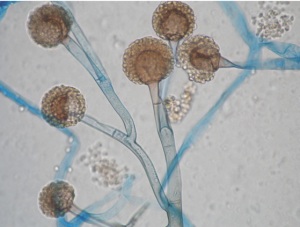 Microscope image of Rhizopus spp. (one of the causative agents of mucormycosis)

Treatment is surgical excision wherever possible, coupled with the antifungal drug amphotericin B – nowadays the liposomal formulations are preferred owing to their better adverse effect profiles (although the costs are many times higher than the original formulation). Posaconazole has also been essayed as salvage therapy, with variable success rates. Overall, prognosis is poor especially with cerebral infection, and this patient eventually passed away in ICU.