The Singapore General Hospital (SGH) Diagnostic Bacteriology section’s official blog had recently described the change in healthcare-associated MRSA (HA-MRSA) clones in our local hospitals, with a shift from a near-complete monopoly by ST239-MRSA-III to a duopoly between the older clone and ST22-MRSA-IV (or UK-EMRSA-15) within a period of 10 years from 2001 to 2010.

Number (inferred) of ST239-MRSA-III and ST22-MRSA-IV clinical isolates at the Singapore General Hospital over time. Note the overall fall in the number of MRSA isolates since 2008 as a result of better infection control measures at that hospital.

I like to show the pulsed-field gel electrophoresis (PFGE) picture above because it is easy to understand from the image that there is far more “diversity” among Singaporean ST239-MRSA-III strains than the ST22-MRSA-IV isolates, whose PFGE strips (each lane represents a single isolate) appear identical. However, PFGE – despite being the most widely used and most discriminatory molecular typing technique of the time (2004-2008) – was not able to answer several key questions, namely:

When the opportunity came in the form of an invitation from Prof Sharon Peacock (her rise has since been meteoric and she is due to be the founding director of the Bloomsbury Research Institute) to spend a year at the Wellcome Trust Sanger Institute, generously funded via the NMRC Research Fellowship, we felt that we would be able to answer some of these questions using next generation sequencing technology to describe and compare the entire genomes of a large collection of ST239-MRSA-III and ST22-MRSA-IV isolates. I am extremely grateful to my long-time collaborators – the microbiologists of SGH (the chief blogger of the SGH Diagnostic Bacteriology section’s blog), Tan Tock Seng Hospital (TTSH) and Changi General Hospital (CGH) – for digging out from frozen storage blood MRSA isolates (i.e. obtained from patients with MRSA bacteraemia) obtained during the past decade and providing them freely for the study.

The actual published paper describes the methods and results in full, but in perhaps more accessible language, what we found after several years’ work are as follows: 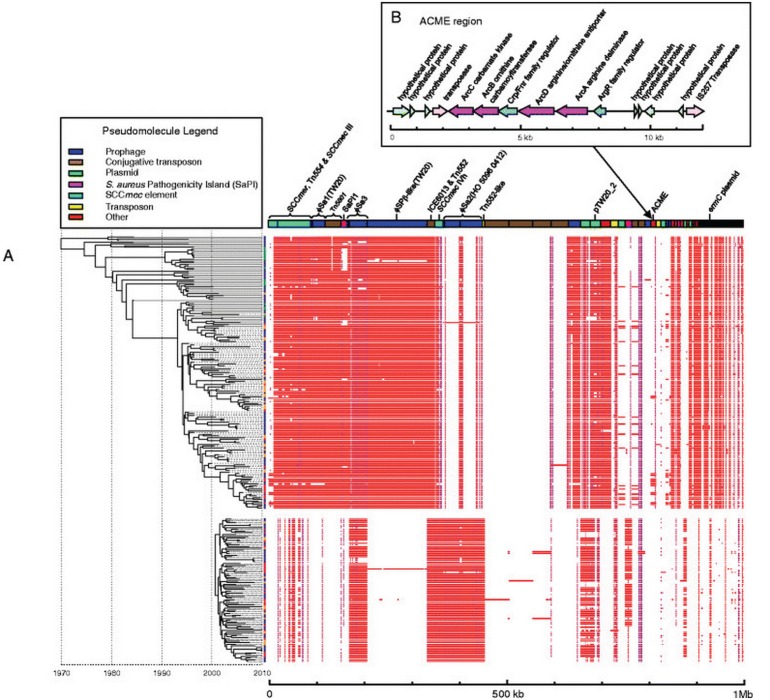 Another figure from the original paper, showing genetic elements such as resistance and virulence genes. ST239-MRSA-III isolates (above) and ST22-MRSA-IV isolates (below) largely do not share similar resistance and virulence genes. Note also the presence of the ACME element – found only in several of the later ST239-MRSA-III isolates.