The MERS-CoV outbreak in South Korea has expanded to 50 cases with 4 deaths as of 5th June 2015. I have not included a transmission tree this time as the details of 7 of the 9 cases reported yesterday are not available. 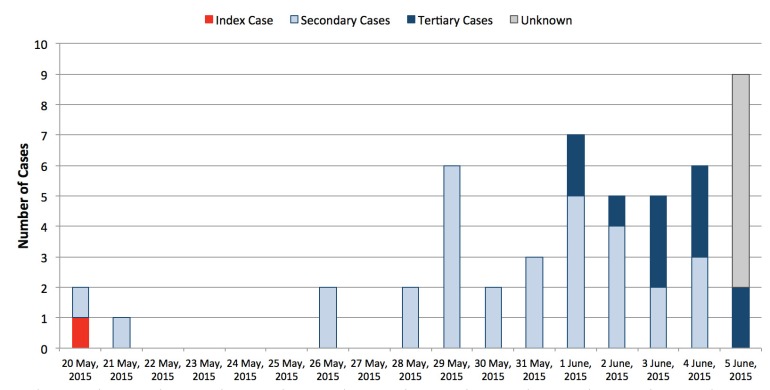 Cases of MERS-CoV infection in South Korea based on date of confirmation.

The Ministry of Health Singapore had announced on 3rd June 2015 that patients with recent travel to South Korea and who presented with pneumonia or severe respiratory infection would be referred to local hospitals for further evaluation to exclude MERS-CoV. However, there would be no screening for fever at the airport for passengers from South Korea, nor is there any travel advisory against travel to South Korea at this point in time.

I have been asked by colleagues and friends regarding travel to South Korea at this time. Note that all school trips to Korea from Singapore have been cancelled. I believe that the actual risk of acquiring MERS-CoV from a trip to Seoul (unless one steps into one of the healthcare facilities where MERS-CoV transmission had occurred) is infinitesimally low. There are 50 cases to date in a country of 50 million (10 million if one considers the city of Seoul alone), with virtually all transmission of a rather poorly transmissible virus occurring within healthcare settings. This view is obliquely supported by experts interviewed by a Nature journalist. The real problem, however, is social, due to the paranoia that now surrounds this disease in South Korea. If one flies to South Korea, and develops an upper respiratory tract infection or influenza after one’s return, one is liable to be quarantined (if one seeks medical attention locally) and/or be viewed with unease by one’s family/friends/colleagues. This is not a trivial price to pay, despite objectively there being nearly zero chance of acquiring MERS while in South Korea.