A young man with HIV (latest CD4 count = 148 cells/cubic millimetre of blood) presented with diarrhoea of 2 weeks after traveling to Bangkok, Thailand for a holiday. There was no fever and no blood in the stool. A short course of oral antibiotics had not helped, and routine stool work-up – involving stool culture and stool microscopy for ova, cysts and parasites – was negative. However, modified acid-fast staining of his stool sample showed the following: 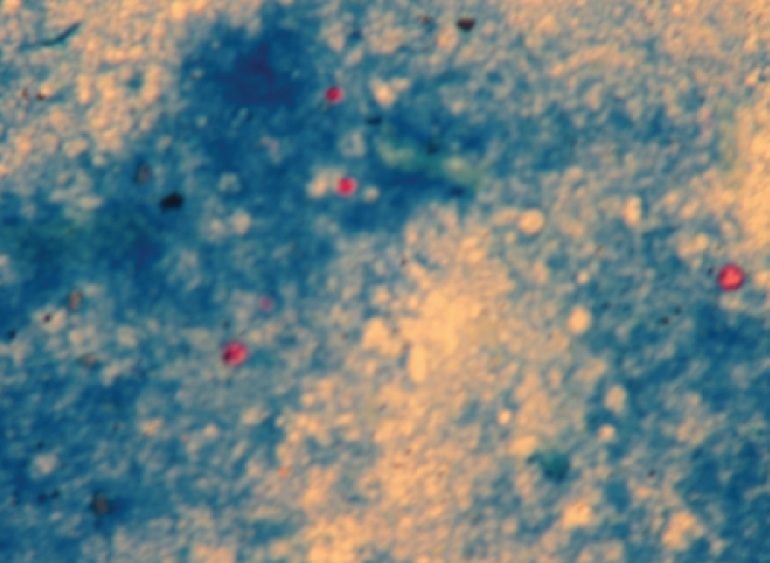 Question: What is the diagnosis and how should the diarrhoea be managed?

There are two different organisms demonstrated by modified acid-fast staining of the stool. The smaller one is Cryptosporidium parvum, whereas the larger (9-10 microns) is Cyclospora cayetanensis (so named because it was first described at the Universidad Peruana Cayetano Heredia in Peru). The two organisms appear similar except for the size, and C. cayetanensis was at first thought to be a “large Cryptosporidium“ before it was established to be a different genus altogether. Both are single cell protozoa (i.e. parasites rather than bacteria or fungi or virus) that are present worldwide, and infect humans mainly via ingestion of contaminated water, although sexual transmission of Cryptosporidium is well documented but far rarer. Both can infect healthy individuals, but the key difference is that infections in such individuals tend to be self-limited, whereas infection in immunocompromised patients, such as those with AIDS, can be protracted.

Treatment of Cyclospora cayetanensis infection is with bactrim, whereas nitazoxanide can be used for the treatment of Cryptosporidium diarrhea, although it’s efficacy appears limited in those who are immunosuppressed. For patients with HIV, starting anti-retroviral therapy (ART or HAART) is key.

The other protozoa that can cause diarrhoea in immunosuppressed patients, and which can also be identified via modified acid-fast staining of stool, is Cystoisospora belli (it used to be known as Isospora belli).