I went with a small group of colleagues to Dili, Timor-Leste, to teach about appropriate antibiotic prescription for common infectious diseases to doctors from municipal hospitals in Dili, Timor-Leste. This seminar was organised by ReAct – an independent global network for concerted action on antimicrobial resistance based out of Uppsala University in Sweden – and the World Health Organization. It was held at the Hospital Nacional Guido Valadares (HNGV), the main referral hospital for Timor-Leste.

The Singapore team of ID physicians and pharmacists at Dili, with our hosts from HNGV.

This was the fourth seminar taught by infectious diseases and pharmacists from different hospitals in Singapore. Because antimicrobial resistance is a major global problem, health authorities in Dili felt it was necessary for their doctors to be familiar with the concept of appropriate antibiotic prescription, without wasting a valuable resource by generating unnecessary antimicrobial resistance or poor patient outcomes. It takes a certain amount of humility and forward thinking to do this.

Timor-Leste is a small country (even smaller than Singapore!) that regained its independence in 2002 from Indonesia following a UN-sponsored referendum. It’s healthcare infrastructure is limited, with many of the things we take for granted in Singapore not available in their hospitals and clinics. There is no MRI machine in the country. The hospital laboratories are able to perform sputum smears for acid-fast bacilli (TB) and blood films for malaria, but have no bacterial culture capabilities. The National Health Laboratory is not able to perform blood cultures at this point, and sometimes reagents for microbiological tests and cultures run out. Blood agar (used for growing most pathogenic bacteria from clinical specimens) is made manually using expired human blood from the National Blood Bank, and not from sheep or other animal blood like in most other countries (in Singapore, our laboratories buy sheep’s blood agar from commercial companies).

A view of HNGV from the front (car-park).

A pleasant fountain and little garden within HNGV.

The municipal hospital doctors only have a limited range of antibiotics to use, namely ampicillin (and amoxicillin), cotrimoxazole, metronidazole, gentamicin, ciprofloxacin (only oral) and ceftriaxone. The last named antibiotic, which is liberally prescribed in Singapore by junior doctors for most patients with suspected community-acquired infections, is reserved for the very sick patients in Dili’s municipal hospitals. HNGV doctors have accessed to more broad-spectrum antibiotics including vancomycin and meropenem, but not to antibiotics such as piperacillin/tazobactam or even cefazolin. Because of the lack of bacterial culture capabilities, it is not known what are the most common bacteria causing infections in the country. 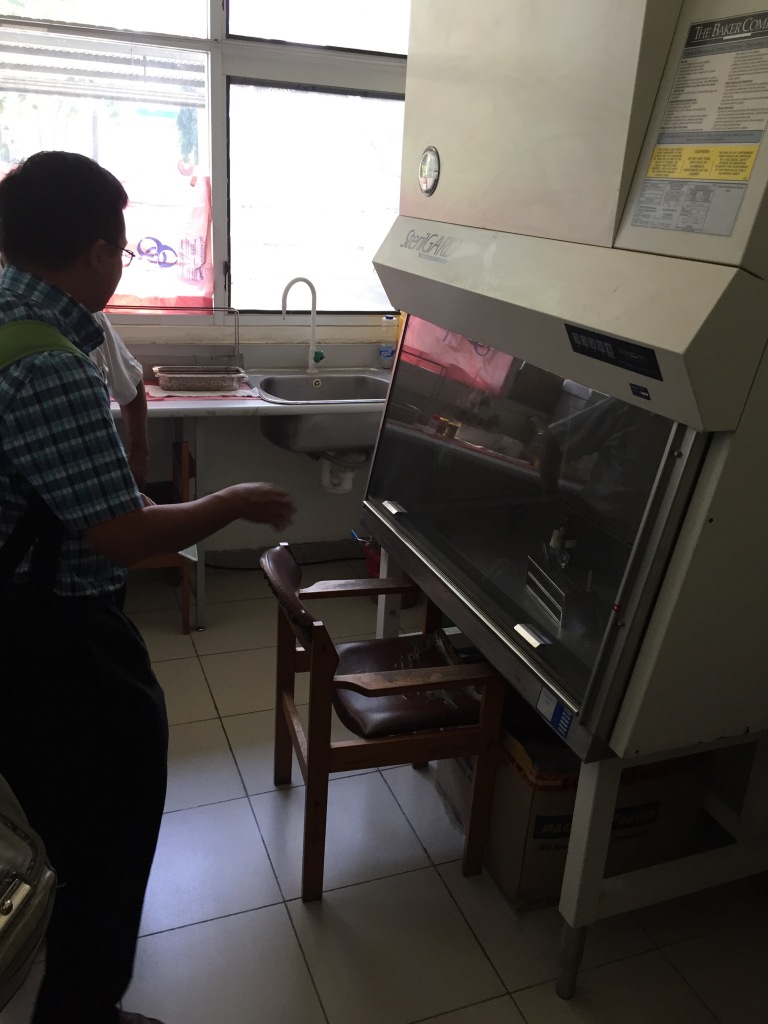 Bacteriology section of the National Health Laboratory in Dili

However, the doctors we met were all keen to learn, and many displayed a drive to improve the healthcare of their country. I hope they found some of the discussions and lectures useful. We certainly had an enriching experience as well.