Chemotherapy-induced febrile neutropenia is a life-threatening condition that remains common during the therapy of haematological malignancies, but has become far rarer for patients with solid tumours because of the increased use of targeted therapy. It is traditionally defined as a single oral temperature of 38.3ºC or a temperature of greater than 38.0ºC sustained for more than 1 hour in a patient with neutropenia (itself defined as an absolute neutrophil count (ANC) of less than 500/µL, or less than 1000/µL with an anticipated decline to less than 500/µL in the next 48-hour period). Various studies in the 1990s to 2000s in US, Europe and Singapore showed that the overall mortality was between 3.0% and 10.0%.

The fundamental principles of management of chemotherapy-induced febrile neutropenia were borne largely out of historical experience and have not changed over time. Whether some aspects of these still apply today or can be tweaked is open to challenge:

Why the emphasis on P. aeruginosa? In Evan Hersch and co-workers’ work published in JAMA 1965, they found that the terminal event for up to 35% of leukaemic patients with neutropenia was P. aeruginosa bacteraemia. In another early paper by Schimpf, it was shown that delay in starting antibiotics for patients with febrile neutropenia resulted in high mortality (again largely due to P. aeruginosa). 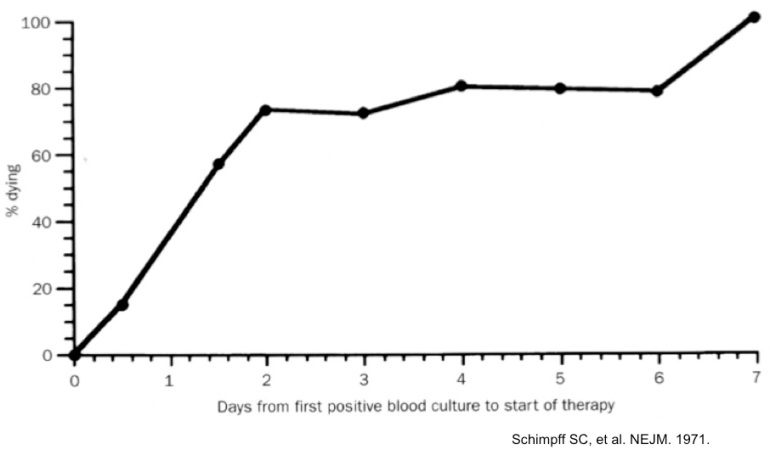 Higher mortality from delayed initiation of antibiotics for febrile neutropenia (This paper is quoted numerous times although I have not been able to actually view the source data).

At what I consider to be the height of paranoia in those early days, patients with febrile neutropenia in some centres would routinely receive 4-5 antibiotics (including two antibiotics active against P. aeruginosa) empirically, with a treatment success rate of 59.3%. 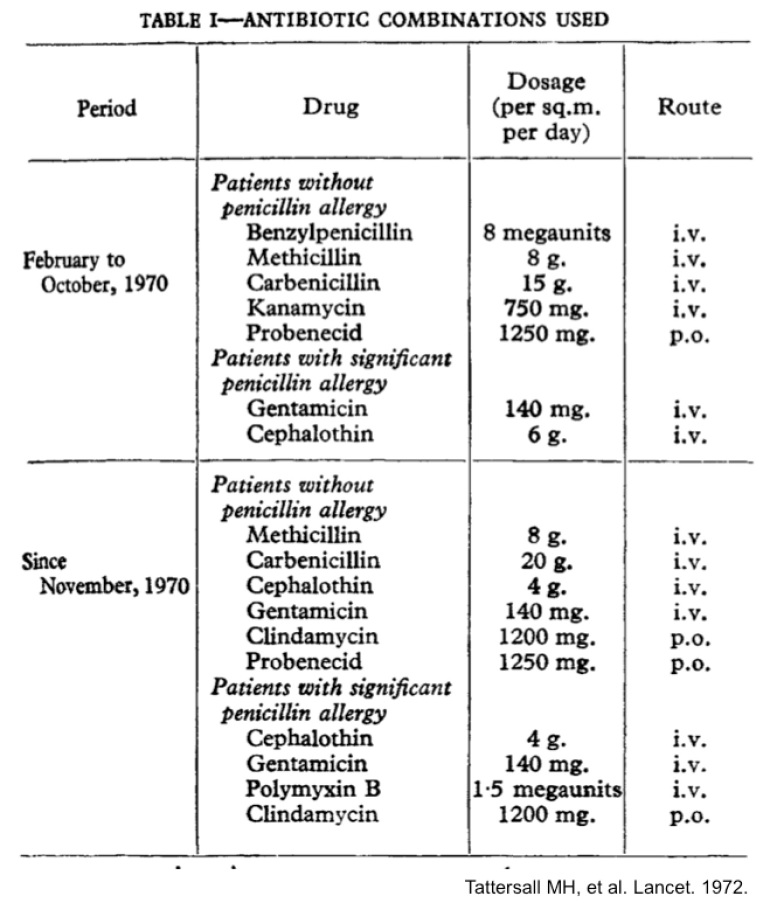 However, two major changes occurred in the 1970s and 1980s. Firstly, the proportion of bacterial (fungal infections will be dealt with separately) infections in febrile neutropenia caused by P. aeruginosa dropped precipitously from the 1970s, falling from a high of approximately 50% of all bloodborne infections in the 1960s to <10% by the 1980s (and <5% today). In fact, Gram-negative infections in febrile neutropenia dropped as a whole, whereas Gram-positive infections (mostly coagulase-negative staphylococci, although it is contentious that the majority were actually pathogenic) rose. Several reasons have been postulated to explain these changes, including better environmental cleaning and availability of sterile water (resulting in a drop of P. aeruginosa infections), antimicrobial prophylaxis, and the rising use of long-term central venous catheters for such patients. 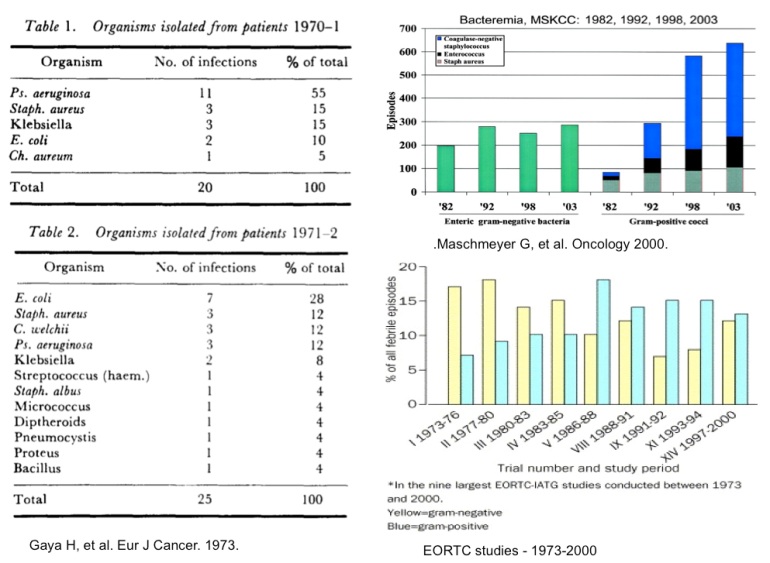 Higher mortality from delayed initiation of antibiotics for febrile neutropenia (This paper is quoted numerous times although I have not been able to actually view the source data).

Secondly, more powerful beta-lactam antibiotics were developed that were potent against P. aeruginosa, including ceftazidime, the carbapenems, ticarcillin, piperacillin-tazobactam, and cefepime. Clinical trials with these antibiotics showed that monotherapy was essentially equivalent to combining these antibiotics with an aminoglycoside (combination therapy), and gave better outcomes compared to historical studies with multiple antibiotics.