After the rates of Pseudomonas aeruginosa infections fell in patients with febrile neutropenia, it became tacit knowledge to many oncologists (and haematologists) that the majority of patients with febrile neutropenia – especially those with solid organ cancers – recovered uneventfully. How could this knowledge be codified into a predictive model that could reliably separate out patients at low risk of developing further complications from febrile neutropenia? Such a model would not merely be an academic exercise, but would have real value in identifying patients for earlier discharge, antibiotic de-escalation, and even outpatient management (a revolutionary concept in the 1990s).

One of the earliest attempts was the eponymous classification developed by Prof James Talcott early in his oncology career at the Dana-Farber Cancer Institute in Boston, U.S.A. His team stratified patients into four groups and found that the risk of complications including death was far lower (<5%) in Group IV. However, this classification is not very sensitive, as is readily apparent, and misclassified many patients.

A better model was subsequently developed and published in 2000 by Prof Jean Klastersky, Head of the Department of Medicine at the Institut Jules Bordet in Brussels, Belgium (interestingly, he was also the chief of the Section of Infectious Diseases at that institute prior to becoming head of medicine and professor of oncology at the Université Libre de Bruxelles, Belgium). Working with investigators from U.S.A. (including Prof James Talcott from Dana-Farber Cancer Institute), Australia, Canada, Denmark, and South Africa, the investigators developed what is now known as the Multinational Association for Supportive Care in Cancer  Risk Index ((MASCC score for short). Using a series of simple clinical characteristics with different assigned scores, clinicians could now reliably identify patients with febrile neutropenia who are at low risk of complications and death. The MASCC score has since been challenged and externally validated in numerous studies, and what is perhaps remarkable is that nothing else has come close to replacing it (even with laboratory investigations included) in the past 15 years, especially for adult patients with solid organ tumours and febrile neutropenia. 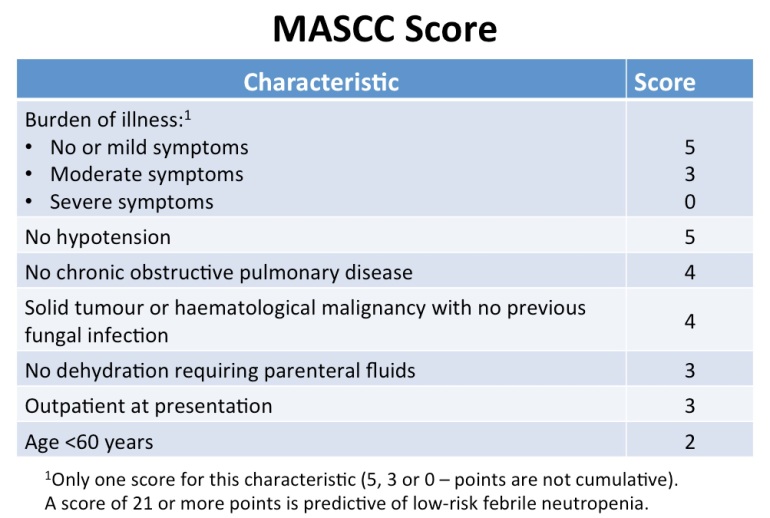 The score is by no means perfect. It is far less reliable if only patients with haematological malignancies were evaluated. It is also not a sensitive test and is poorly predictive if used for the opposite purpose – to detect patients with febrile neutropenia who are at high risk for complications or death.

With the ability to reliably predict patients at low risk of complications, investigators began to actively assess whether such patients could be managed with just oral (as opposed to intravenous) antibiotics, and as outpatient (actually, this started way before 2000, but the definition of “low risk” was inconsistent and therefore results were difficult to extrapolate outside individual centres). The results are as might have been expected – yes for oral antibiotics, and yes for outpatient management.

Translating evidence to clinical practice has always been difficult. Could outpatient management of febrile neutropenia be successfully implemented in Singapore? This became a particular hobby horse of mine, starting from 2008 (note: 8 years after the MASCC score was published and more than 15 years after it was shown to be safe for low risk patients). There are obvious advantages to outpatient management of febrile neutropenia locally:

These had to be weighed against the single (justifiable) concern that some patient would be misclassified, develop complications while on outpatient oral antibiotic therapy, and be admitted severely ill (or die) – which was felt to be harder to justify than if some patient had been hospitalised for febrile neutropenia and died (at least one had tried one’s best!). There were already individual oncologists who had started to manage some of their own patients with febrile neutropenia on an outpatient basis, but there was no standard protocol for doing this on a departmental or hospital level among the cancer units here.

The first thing was to start a febrile neutropenia database. International studies are well and good, but sometimes cannot be extrapolated because local epidemiology can be different. Data are also required for monitoring and assessment. Cross-departmental and cross-institutional databases are tricky things but fortunately there was enough support among oncologists, haematologists and the nurses as well as a bit of funding such that this could be achieved. The early data suggested that in the Singapore setting, outpatient management of febrile neutropenia would not work for patients with haematological malignancies. More than 3 in 10 of these patients had bacteraemia (including those that would have been classified as low risk by the MASCC score), of which approximately 1/3 was due to ESBL-producing Gram-negative bacteria. These patients also required frequent transfusion of blood products, which was difficult to organise in a timely fashion in the outpatient setting. These same early data showed that outpatient management would probably be successful for patients with solid organ tumours and febrile neutropenia.

The actual work of implementing outpatient management of febrile neutropenia threw up several challenges, some of which were not foreseen because of my inexperience in these matters.

How did the attempt fare? The first year assessment was disappointing. Only 4.5% (11 of 247) of patients with low-risk febrile neutropenia were managed as outpatients. Of course, this was a bit of an underestimate as several patients would not have qualified for outpatient therapy because of considerations other than the MASCC score. Nonetheless, it underscored the challenges faced – many patients were kept inpatient (rather than discharged sooner) because physicians felt more comfortable waiting for the fever to settle (median time for fever resolution is 3 to 5 days for febrile neutropenia) and for the final blood culture results to be reported prior to discharging them.

There is no happy ending to this story (yet). The febrile neutropenia database was transferred over to the respective cancer units after a few more years (where similar data are no longer being collated). The main driver for the febrile neutropenia outpatient management programme at the major cancer unit in Singapore had recently left for private practice. A minority of patients with solid organ tumours and febrile neutropenia continue to be managed in the outpatient setting, however. The major change sweeping through the oncology field in recent years is the introduction of targeted therapy and immunotherapy, such that febrile neutropenia is no longer as common a complication as it was even in the recent past. A qualified success of sorts.