We move on from outpatient management of febrile neutropenia – which is backed by good science and is conceptually attractive but not straightforward to implement – to inpatient management of “high risk” (by MASCC or other criteria) febrile neutropenia, specifically in the area of antibiotic therapy. Here, there are a bewildering number of options (basically, virtually all anti-pseudomonal IV antibiotics have been studied) especially if the patient is inconveniently not allergic to  any drug. Luckily, most institutions, including those in Singapore, will have antibiotic guidelines for the management of febrile neutropenia. International guidelines, such as this one published in 2011  by the Infectious Diseases Society of America (IDSA), are easily accessible via the internet.

The first point to note is that anti-pseudomonal beta-lactam antibiotics (such as ceftazidime, cefepime, piperacillin/tazobactam, imipenem and meropenem – doripenem has not been formally studied in a clinical trial) outperform all other anti-pseudomonal antibiotics. Cefoperazone-sulbactam is not available in Singapore and not mentioned in the IDSA guideline, but it is available in many countries in Asia and there is extensive  (albeit mostly unpublished) experience with this drug for febrile neutropenia.

Is Two Better Than One (Part I)?

Many 1980s-1990s treatment protocols (including local hospital guidelines in the 2000s) included aminoglycosides in combination with an anti-pseudomonal beta-lactam for the treatment of febrile neutropenia. But in a Cochrane review of 71 clinical trials published 3 years ago, Prof Mical Paul and colleagues from Israel showed that there was no survival difference between monotherapy and combination therapy, whereas there was an expectedly higher risk of nephrotoxicity among patients who received aminoglycosides. Therefore not including an aminoglycoside in an empirical treatment protocol for febrile neutropenia is safer. 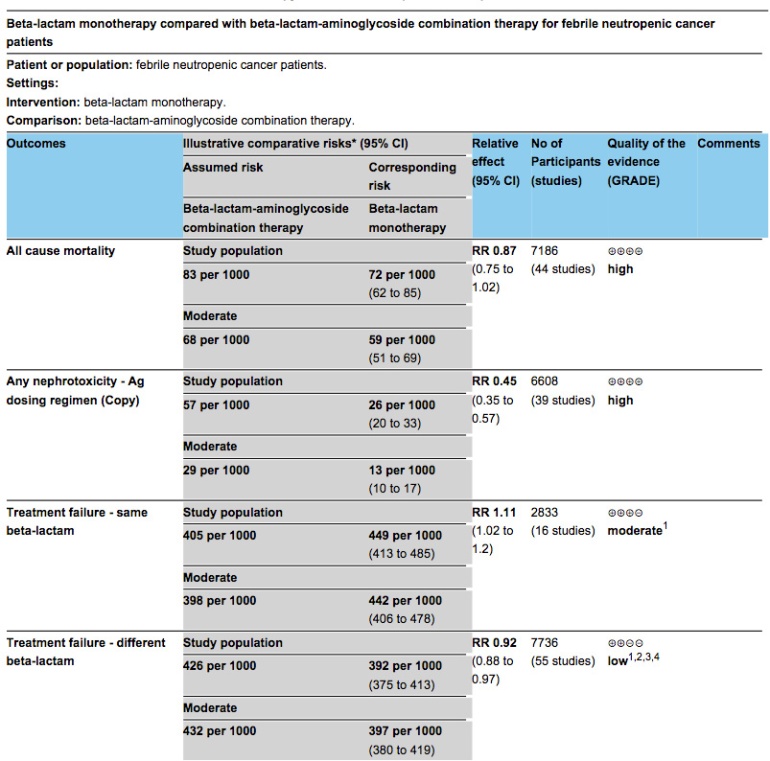 Summary table from the 2013 Cochrane review on beta-lactam monotherapy vs. beta-lactam-aminoglycoside combination therapy for febrile neutropenia.

Aminoglycosides have persisted on the febrile neutropenia empirical treatment protocols of Singaporean hospitals up to the 2000s largely because of experts’ concerns of high rates of ESBL-producing Enterobacteriaceae and other resistant Gram-negative bacteria in the local setting. But at least in the setting of neutropenia, aminoglycosides (and polymyxins) are inferior antibiotics compared to beta-lactams. Particularly in the case of P. aeruginosa bacteraemia, old case series have highlighted dramatic differences in survival rates of patients that received beta-lactam antibiotics compared to those that received aminoglycosides or polymyxins. The numbers are small, but the different survival rates are so huge that this cannot be due to chance alone.

Dropping aminoglycosides from empirical treatment protocols for febrile neutropenia in our local university hospital did not result in more deaths in patients with ESBL-producing Enterobacteriaceae bacteraemia.

Is Two Better Than One (Part II)?

What about empirical vancomycin, given higher rates of Gram-positive infections as highlighted in the previous blog post? It turns out that the majority are caused by less virulent organisms such as coagulase-negative staphylococci (CoNS), and a quick review of the literature does not permit one to reliably decide whether the isolated CoNS were truly responsible for the fever – in published reports from many centres, blood cultures were obtained only from the central venous catheter (if one was in place) or from the peripheral veins, and in other clinical settings, these results might have been dismissed as blood culture contaminants or line colonisation.

Unsurprisingly then, empirical Gram-positive coverage in the form of vancomycin gave no survival benefit and also resulted in more nephrotoxicity. It resulted in greater “treatment  success without modifications” (an unusual outcome measure!) presumably because many patients with febrile neutropenia in the non-vancomycin arms of those studies were prescribed vancomycin at some point afterwards. 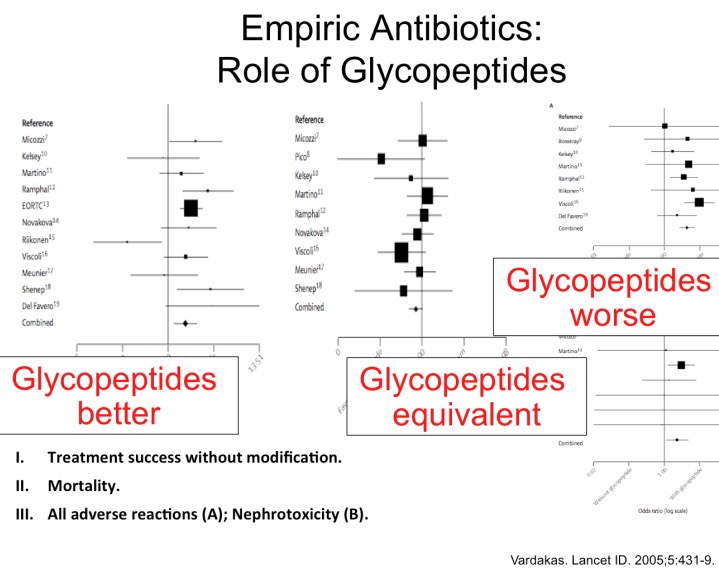 The lack of treatment benefit of empirical vancomycin has been known since 2005. However, when we looked through our febrile neutropenia database, we realized that many of the local patients had been prescribed empirical IV vancomycin, or had it added to their antibiotic regimen if fever persisted despite the absence of Gram-positive organisms from culture specimens. Such use was particularly rampant at the eastern cancer institute back in 2010, with close to half of all patients receiving vancomycin during their febrile neutropenia episode.

Is there One above the Rest?

Given the broader antibacterial coverage of carbapenems relative to other anti-pseudomonal beta-lactams, and the poor Gram-positive coverage of ceftazidime, is there a beta-lactam that is superior than the rest for the treatment of febrile neutropenia? The counter-intuitive answer seems to be piperacillin-tazobactam, at least based on a Cochrane meta-analysis of 44 trials published by the Israeli group in 2010. It was associated with a reduced relative risk of mortality compared to the other beta-lactams, although it was assessed in the smallest number of trials (RR 0.56, 95% CI 0.34 to 0.92, 8 trials, 1314 participants). The carbapenems were associated with higher rates of antibiotic-associated diarrhoea (not surprising), whereas cefepime was found again to be associated with higher mortality (RR 1.39, 95% CI 1.04 to 1.86, 21 trials, 3471 participants).

I remember when the original meta-analysis that highlighted cefepime’s association with heightened relative risk of mortality in febrile neutropenia was published in 2006. It caused quite a stir as cefepime had by then become one of the “workhorse” antibiotics for the Singapore General Hospital, especially for febrile neutropenia. The association, however, lacked biological plausibility, as there was no increase in adverse events or microbiological treatment failures relative to the other beta-lactams. The U.S. FDA investigation and reply came more than 3 years later. Combining both published and unpublished trials (the latter obtained from Bristol-Myers Squibb), investigators from the FDA showed that there was no association between cefepime and increased relative risk of mortality based on both trial-level and patient-level meta-analyses. This put to rest most of the doubts about cefepime’s safety, although I will put up a link to one of the most interesting replies to the FDA assertion here.