Vancomycin-resistant enterococci (VRE) belong to the current “pantheon” of “superbugs” causing human infections primarily in the hospital setting. Enterococci are a type of Gram-positive bacteria that are part of the intestinal flora. They are opportunistic pathogens, causing infections primarily in immunocompromised patients, especially when the gut mucosal barrier has been broken. Two species cause virtually all the enterococcal infections in humans – E. faecium and E. faecalis. In terms of propensity for causing human infections, they are far less virulent than other common bacteria such as Staphylococcus aureus, Escherichia coli, Klebsiella pneumoniae, and many others. For the sake of completeness, it is important to note that enterococci can also cause infections in healthy persons – urinary tract infections predominantly and very rarely, heart valve infection (endocarditis). This is a good thing because enterococci are hardy bacteria that are difficult to kill even when they are reported as being susceptible to the antibiotics tested against them. The term VRE is an anachronism, a throwback to a period – more than a decade ago – when vancomycin was the only antibiotic that could reliably treat severe infections caused by methicillin-resistant S. aureus (MRSA) and ampicillin-resistant enterococci. It was discovered that some versions of the van gene that made enterococci resistant to vancomycin (specifically vanA and vanB) could be transferred to MRSA, in effect creating VRSA that were virtually untreatable (this was more than a decade ago).

VRE were first isolated and identified in the UK in 1988, following which they were found in the USA and many other European countries before a more global dissemination. One of the causes for the emergence of VRE is the use of the antibiotic avoparcin (a glycopeptide related to vancomycin) in animal feed as a growth promoter in Europe (and to a lesser extent in Australia and New Zealand) since 1975. Banning avoparcin as a growth promoter in animals reduced but did not eliminate the prevalence of VRE in farmed animals (article behind a paywall).

How about Singapore? My colleague Dr Piotr Chlebicki from Singapore General Hospital (SGH) published an excellent review in 2008, documenting chronologically the sporadic reports of VRE causing local infections since 1994, prior to the bigger outbreaks at SGH in 2004 and 2005. The 2005 outbreak in particular made it to the public eye, generating a number of news pieces and also parliamentary questions. The “sanitised” part of outbreak control at SGH was published in the American Journal of Infection Control (AJIC) in 2008 (behind a paywall). It was an impressive effort championed principally by Dr Asok Kurup (an infectious diseases physician now in the private sector), screening thousands of patients, shutting wards, and stopping elective surgery for weeks. Including revenue loss, the whole operation must have cost millions of dollars for what was effectively fewer than 180 VRE carriers (there were only a handful with true infections).

VRE cases at SGH during the outbreak in 2005. Data derived from the American Journal of Infection Control publication in 2008.

However, there was a salutary effect to the SGH effort that is even now under-appreciated – VRE rates at all hospitals in Singapore remained low for the next five years! From the chart below, it is quite clear that the total number of VRE isolated – at least in the public hospitals – hardly crossed 100 each year between 2006 and 2010. 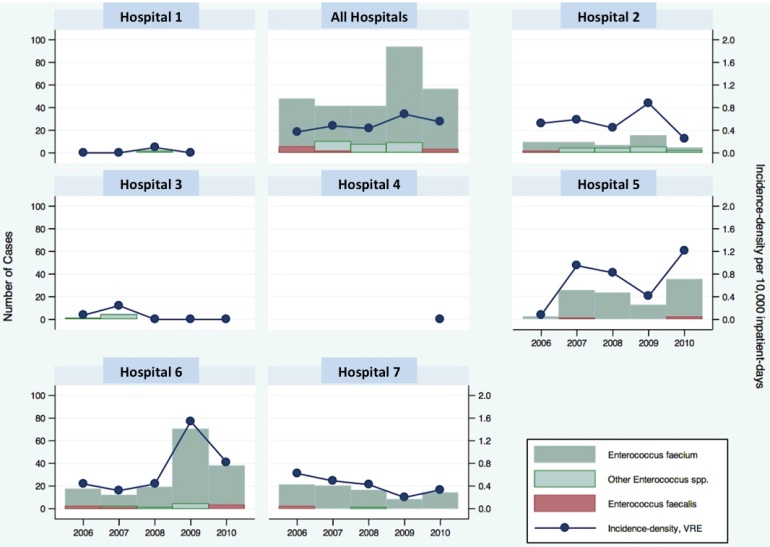 VRE in Singapore hospitals (case count). A black-and-white version of this was published in the Annals of Academy of Medicine, 2012.

Where are we with VRE today, more than 10 years after the SGH outbreak? Systematic hospital data are unfortunately not publicly available (although there are several good reasons why such data should be publicly available), but there have been sporadic publications from which an incomplete picture can be drawn. Researchers from Tan Tock Seng Hospital (TTSH) reported 243 VRE-colonised/infected cases from that hospital for the whole calendar year of 2012. Similarly, researchers from the National University Hospital (NUH) reported 405 VRE-colonised/infected cases over a period of 85 months (2008-2015), peaking in 2012 and declining over the next three years (paper behind a paywall). No data are publicly available from SGH since the 2008 AJIC paper. VRE rates have generally been far lower from the other public sector hospitals, probably because of the differing patient populations. But the suggestion from these papers is that the VRE “problem” has by no means gone away in Singapore, and may perhaps be worse than in 2005.

What should be done is another matter. The subject matter is controversial but I am of the opinion that there are far more important superbugs to focus on today. Carbapenem-resistant Enterobacteriaceae (CRE) rates are rising all over the country and the world, and patients infected/colonised by CRE necessarily compete with VRE-colonised/infected patients for hospital resources such as isolation rooms/cohort cubicles (along with patients with chickenpox, tuberculosis and MRSA). The concern with VRE has always been less about the bug itself than the fact that the vancomycin resistance gene can be transmitted to MRSA, a far more virulent bacteria. Lots of circulating VRE and MRSA in the same setting will increase the possibility of such events occurring. However, there are also far more antibiotics – albeit far more expensive ones – available for the treatment of VRE and MRSA, such that an “untreatable” VRE or VRSA infection is not a real concern today. Another convulsive effort, such as by SGH in 2005, seems to be less cost-effective compared to 2005 and – in the face of the CRE threat – also somewhat akin to rearranging deck chairs on the Titanic. Focusing on CRE, while continuing to improve overall hand hygiene compliance as well as overall prudence in antibiotic prescription, would be a pragmatic approach to VRE in the specific setting of Singapore hospitals.