The final of the four Singapore papers in the May supplementary issue of Clinical Infectious Diseases, and by no means the least, focused on carbapenem-resistant Enterobacteriaceae (CRE) in inpatients from public hospitals in Singapore. The majority of the data are from a cohort study, aptly titled CaPES (Carbapenemase-Producing Enterobacteriaceae in Singapore), initiated in 2013 to prospectively study the epidemiological and clinical factors, as well as the outcomes associated with CRE colonisation and infection in Singapore hospitals. The rest of the data are from the National Public Health Laboratory (NPHL) of Singapore, which has been collecting CRE data and isolates from public sector microbiology laboratories in Singapore since 2010.

I had briefly described the epidemiology of CRE in Singapore in an earlier post in 2014, and further details can be found at the blog of the Singapore General Hospital microbiologists. It is great that part of the subsequent spread of CRE in Singapore is being monitored and publicly documented – I say “part” because the data from the private hospitals and community hospitals are still not being systematically collected, but hopefully this will change over time. What did the CaPES and NPHL investigators describe?

Essentially, starting from 2010, the number of inpatients colonised or infected by CRE have increased exponentially (figure above). The number of cases of CRE infection increased in 2011, but appears to have plateaued since 2013. The number of cases of CRE colonisation increased dramatically since 2013, but this is because of the exponential ramp-up of CRE screening in virtually all of the public (and private) hospitals in Singapore. As previously mentioned, Enterobacteriaceae can become resistant to carbapenems via 2 major mechanisms – acquisition of a carbapenemase gene, or loss of porins (protein channels on the cell membranes of bacteria) in combination with production of extended-spectrum beta-lactamases. The major carbapenemase genes circulating in Singapore are blaNDM, blaKPC and blaOXA (figure below). 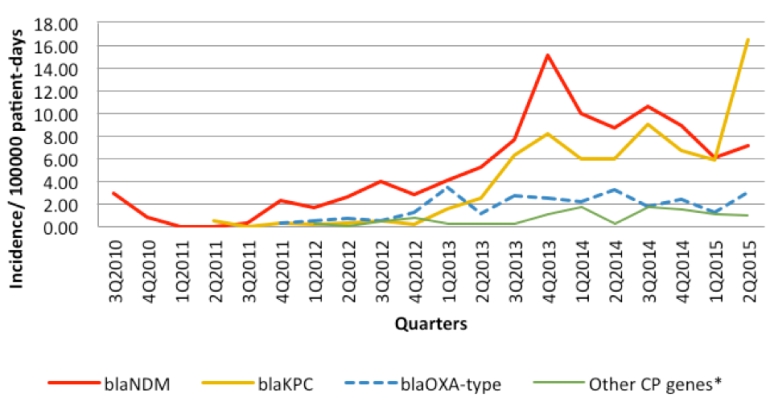 Incidence of different carbapenemase genes in CRE in Singapore.

Of the 659 adult inpatients with CRE identified between December 2013 and April 2015, 249 (37.8%) agreed to participate in the CaPES cohort study.  Of note, only 28% of inpatients with carbapenemase-producing Enterobacteriaceae reported traveling in the preceding year, confirming – if there was any doubt – that the majority of these bacteria are now circulating in Singapore rather than acquired overseas. 19.7% of inpatients with CRE died during their hospitalisation, but it is unlikely – given that the majority of these cases represented CRE colonisation rather than infection – that their deaths were due to CRE.

It is quite clear that more extensive work is required – beyond continuing CRE surveillance and this cohort study – to further understand and contain CRE transmission in our hospitals. It might also help if such data are publicly available on a more timely basis (rather than just via academic publications – note the lag of 2 years where the data collection is concerned), with explanations on what is being done to deal with this global problem at a local level.