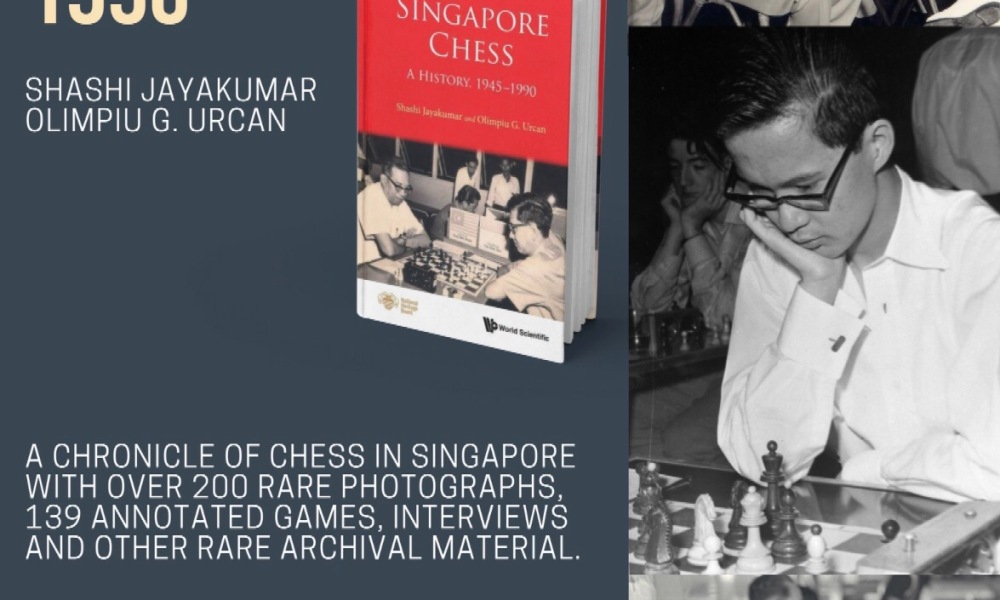 I attended the launch of Dr Shashi Jayakumar and Mr Olimpiu Urcan’s marvelous book – Singapore Chess: A History, 1945-1990 – two evenings ago at the National Library.

Screen capture of the chess book launch from the NLB website.

The book is both a historical treatise – including interviews with many former top Singaporean chess players as well as archived data from multiple sources – as well as a “proper” chess book with annotated games. It can be purchased from local bookshops such as Kinokuniya or ordered online from the publisher, World Scientific.

Singapore has never been a chess power – we have never had a player ranked among the top 50 chess grandmasters of the world (imported or otherwise) nor have we had any team finish among the top twenty in any chess Olympiad. The number of international masters (IMs) and grandmasters (GMs) past and present can easily be counted using one’s fingers and toes. Singapore chess has also recently been in the news for all the wrong reasons – here and here, for example.

Nonetheless, there is a shared culture and heritage that we local chess players are quixotically proud of, and it is great that a good part of this has been preserved and penned down in this book.

The book launch itself was very well attended, with over a hundred persons – mainly older chess players – showing up. It was heartwarming to see past players: some of whom I never had the chance to compete against like Dr and FIDE master (FM) Goh Cheng Hong, IM Lim Seng Hoo, and national master Choong Liong On; others whom I crossed swords in my youth, like IM Giam Choo Kwee, FM Ignatius Leong, and Dr Wong Meng Leong; other players in my (also past) generation like FM Ong Chong Ghee, FM Wong Foong Yin, FM Jeremy Lim (three of the “Lim brothers” played chess very well), and top chess coach Junior Tay. There were also a number of current players like IM Goh Wei Ming and FM Lee Qing Aun.

I have a couple of games in the book, one of which was a loss against FM Ong in the National U-16 chess championship (which resulted in him becoming champion and the subsequent claim that this hindered his career – because he spent too much time on the chessboard). But there are other beautiful games by past players in the international stage captured within, which are well worth the perusal by anyone interested in our games.