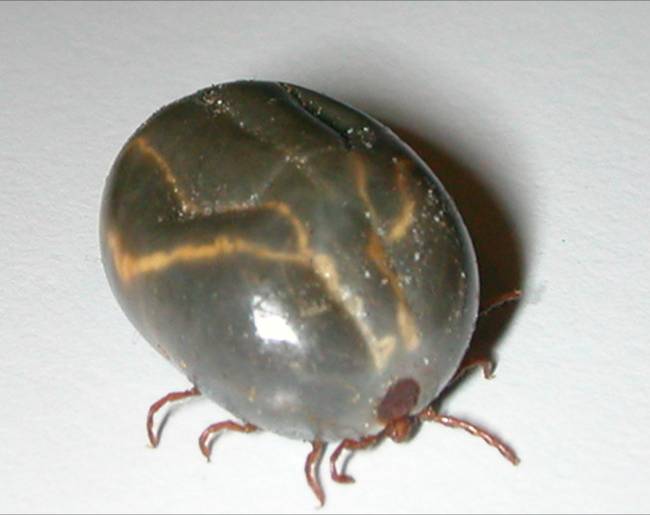 Had to do quite a bit of reading up about this emerging but obscure (at least for Singapore) infectious disease recently. It is actually pretty interesting.

Severe fever with thrombocytopenia syndrome (SFTS) is caused by a member of the Phlebovirus family – the eponymous SFTS virus. The first official report of this disease and its causative pathogen was published in the Chinese medical journal Zhonghua Liu Xing Bing Xue Za Zhi (中华流行病学杂志), although most people are more familiar with the New England Journal of Medicine (NEJM) report published 1 month later in the same year. A slight pity – Huaiyangshan (淮阳山) virus certainly sounds better than SFTS virus!

In the NEJM report, the authors mentioned an unusual cluster of cases with SFTS reported from rural  parts of Hubei and Henan provinces in China between March and July 2009 that had triggered off an active surveillance programme that ultimately identified this new virus. 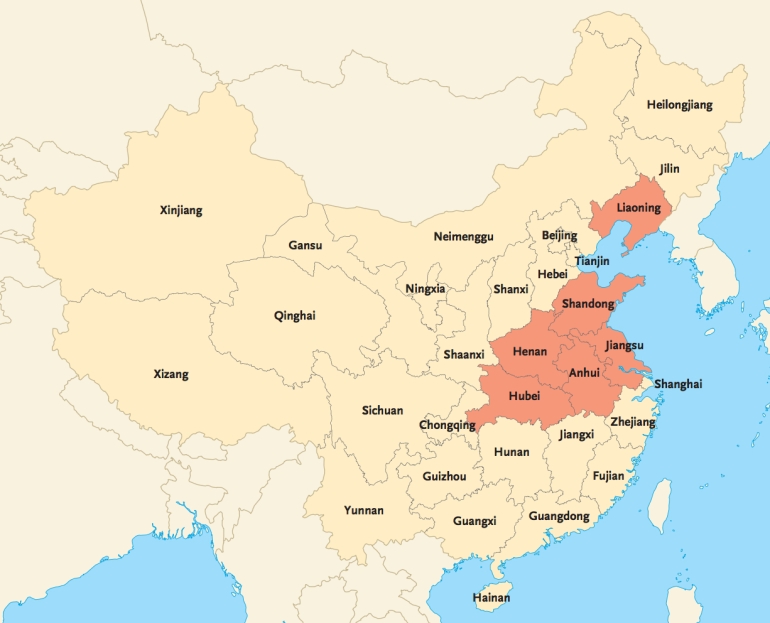 Screen capture from the original 2011 NEJM paper highlighting areas of SFTS surveillance (yellow) and areas where SFTS cases were found (red) in China.

It is likely that the virus and the disease that it causes has been around for far longer, however. There was a Journal of the American Medical Association (JAMA) report of nosocomial transmission of human granulocytic anaplasmosis (HG) – a tick-borne disease caused by the obligate intracellular bacterium Anaplasma phagocytophilum – in a hospital in Anhui province (which shares borders with both Henan and Hubei) in 2006 that raised many alarm bells, because person-to-person transmission of HGA had not been thought to be possible except via transfusion of infected blood products. One of the authors of the JAMA editorial puzzling over the novel aspects of the “Chinese HGA” in 2008 re-looked at those cases in 2016, and concluded that SFTS was a better fit for the clinical presentations and especially the nosocomial transmission of disease.

SFTS is a tick-borne disease, and is carried to date by 4 different Ixodes ticks (Haemaphysalis longicornis, Ixodes nipponensis, Amblyomma testudinarium and Rhipicephalus microplus). The disease has also been described in Japan and South Korea, mostly in rural areas where the Ixodes ticks are most prevalent. It is believed that humans are an accidental and mostly dead-end host for the virus, which can infect many mammals (including cats!) in a “tick-mammal” cycle and which is also transmitted transovarially in the ticks. 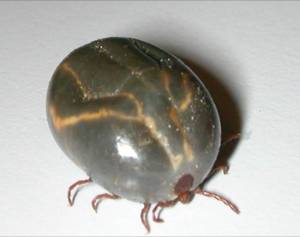 There is an excellent review of SFTS in Japan that is published by their National institute of Infectious Diseases last year. SFTS is a notifiable disease in Japan, and the disease appears to be confined to the western part of the country at this point in time. The vast majority of cases presented between May and August each year, and the number of cases does not seem to be increasing year-on-year. 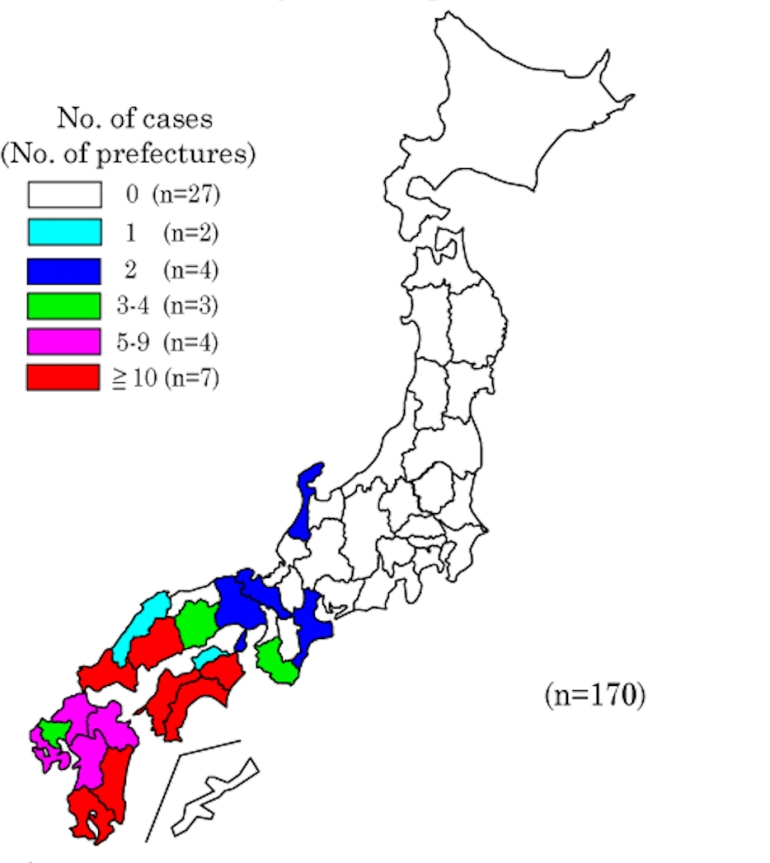 A figure from IASR 2016, depicting the cases of SFTS reported in Japan between March 2013 and February 2016.

In South Korea, the virus and its vector(s) can be found all over the rural parts of the country – there is an excellent summary published in PLoS NTD in December 2016. Unlike the situation in Japan, the number of SFTS cases in South Korea appear to be increasing year on year. The cases are most frequently reported between May and October each year. 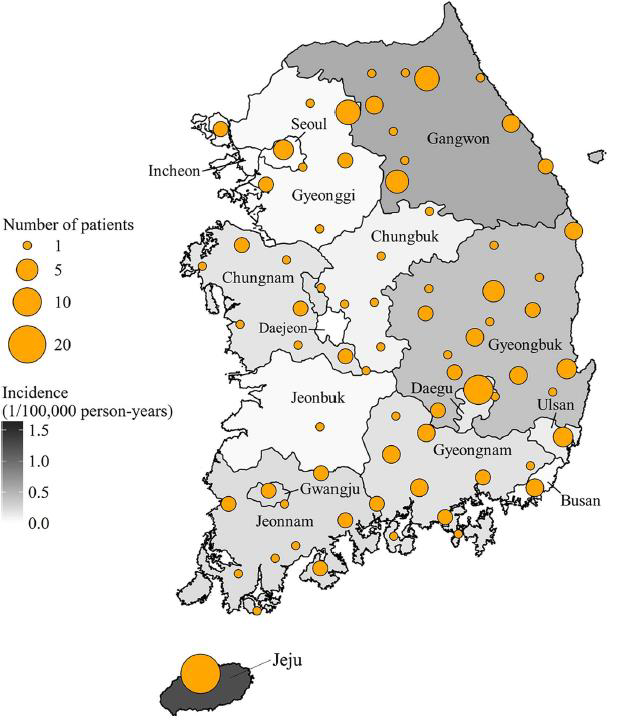 Incidence of SFTS in different parts of South Korea, 2013-2015. Screen capture from the December 2016 publication in PLoS NTD.

How about in China itself? Since its discovery in 2009, more and more cases have been reported each year, likely because of both increasing awareness as well as better diagnostic capability. There is a detailed report published in Scientific Reports earlier this year describing the epidemiology of SFTS in China between 2011 and 2016. Of the 5,360 laboratory-confirmed cases, the majority (87.9%) were farmers and virtually all the cases occurred in 7 provinces (Henan, Shandong, Hubei, Anhui, Zhejiang, Liaoning and Jiangsu – the last being the only province not described in the original 2011 reports). Cases are most frequently notified between April and October each year, with peaks between May and July.

Reminded by a commentator (Prince of Pus) that “Ixodes” reflects a genus (a taxonomic rank below “family” and above “species”) of hard-bodied ticks that is part of the Ixodidae family of ticks. The 4 ticks mentioned above (Haemaphysalis longicornis, Ixodes nipponensis, Amblyomma testudinarium and Rhipicephalus microplus) belong to the Ixodidae family of ticks, and only Ixodes nipponensis is an “Ixodes tick”.

There is also a more updated map of SFTS cases in China, published in the February issue of Virologica Sinica. That article is an excellent review of SFTS and should be perused by anyone interested in the disease (unfortunately behind a pay wall). 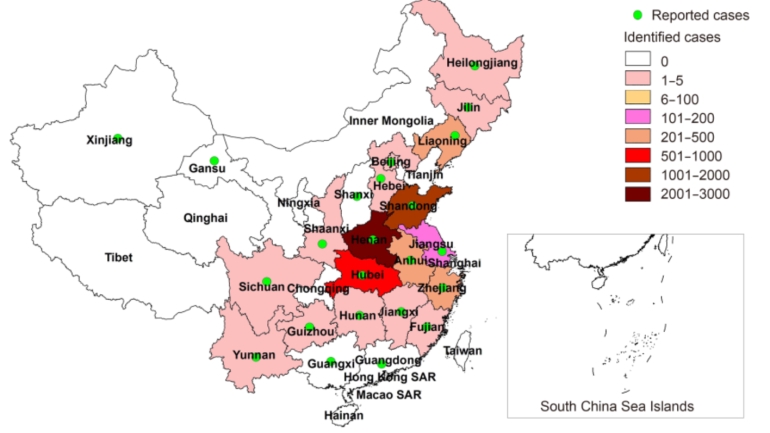 Screenshot from the review article on SFTS in Virologica Sinica, February 2017.