Recent outbreaks in Singapore made me wonder whether there is a paradigm for an effective way of communicating an outbreak (a subset of risk communication) to healthcare professionals and the general public.

This is perhaps especially relevant in the context of the current focus on fake news. The ubiquity of social media and messaging platforms such as Facebook, Twitter, WhatsApp, and WeChat means that information – reliable or otherwise – can be transmitted and amplified rapidly. The MIT publication in Science – showing that falsehoods spread faster, further, and more broadly (reaching up to 100 times more people) than truth on Twitter – is a sobering reminder of the potential for harm if communications are handled poorly.

Local outbreaks where social media has – to my knowledge – played a significant role include the 2015 Group B Streptococcus outbreak that was associated with the consumption of raw freshwater fish (yusheng) in the coffeeshops. Facebook and WhatsApp messages about the risk of consumption of raw freshwater fish (one example below – screenshot from the Channel 8 News website – other examples here) circulated widely at least a couple of days before the joint statement issued by local health authorities, and probably contributed significantly to the reduced consumption of the hawker dish and the subsequent fall in ST283-GBS cases. 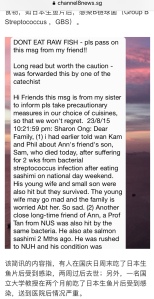 Then there was the listeriosis outbreak associated with rock melons from Rombola Family Farms in Australia. The Agri-Food & Veterinary Authority of Singapore (AVA) had announced that rock melons from the farm had been sold in Singapore between 12th February and 2nd March this year. Then a WhatsApp message went viral on 9th March and was cross-posted on FaceBook (screenshot below) claiming that there was a patient with listeriosis at Singapore General Hospital (SGH) who had consumed rock melons before the onset of illness. Even I believed it because the message was forwarded to me by a reliable source. Local journalists sought clarification and the Ministry of Health (MOH) was more or less forced to issue an official denial the next day. Personal messages from friends/close contacts have an added layer of legitimacy, with a network compounding effect that is difficult to reverse (or even estimate) until the “fake news” breaks out into the open, as was the case in Brazil where a WhatsApp campaign against vaccination jeopardized yellow fever vaccination efforts by the health authorities during the outbreak this year.

In a rapidly evolving outbreak, which is more important for public communication, speed or accuracy? As one might expect, this is a false dichotomy. It is however an important question – how much can accuracy be compromised with respect to speed? This is a critical issue in journalism as well, and was tackled in a research paper by Ms Reiko Saisho of NHK Japan. It turns out that there is no easy answer for journalism, but the paper (or at least its conclusions) are well worth reading: while accuracy is still fundamental (both to journalism and by extension to public communications), being relevant is also important, and the crux is whether appropriate effort has been made in verifying and triangulating the available pieces of information. Any uncertainty has to be communicated to the public as well.

There have been publications that directly discuss outbreak communications. The papers by WHO (drafted after a WHO meeting in Singapore) and ECDC date back 13 and 9 years respectively(!), but the principles remain relevant:

Thankfully, WHO produced an updated guideline “Communicating risk in Public Health Emergencies” in January this year that broadly laid out recommendations for practice and policies that are directly applicable for outbreak communications. While acknowledging the many gaps in evidence (or availability of high quality evidence), this document is nonetheless a major step forward from previous publications, laying out a holistic concept for communications as well as future research priorities for the gaps mentioned. The most important recommendations as far as I can see involve building trust prior to the need for such communications, building the capacity and capability for such communications into health and emergency preparedness and response, and strategic communication planning involving all constituent groups – a repackaging of the principles highlighted above. But there is a specific social media component, and explicit acknowledgment that rumours and misinformation are part and parcel of any risk communication.