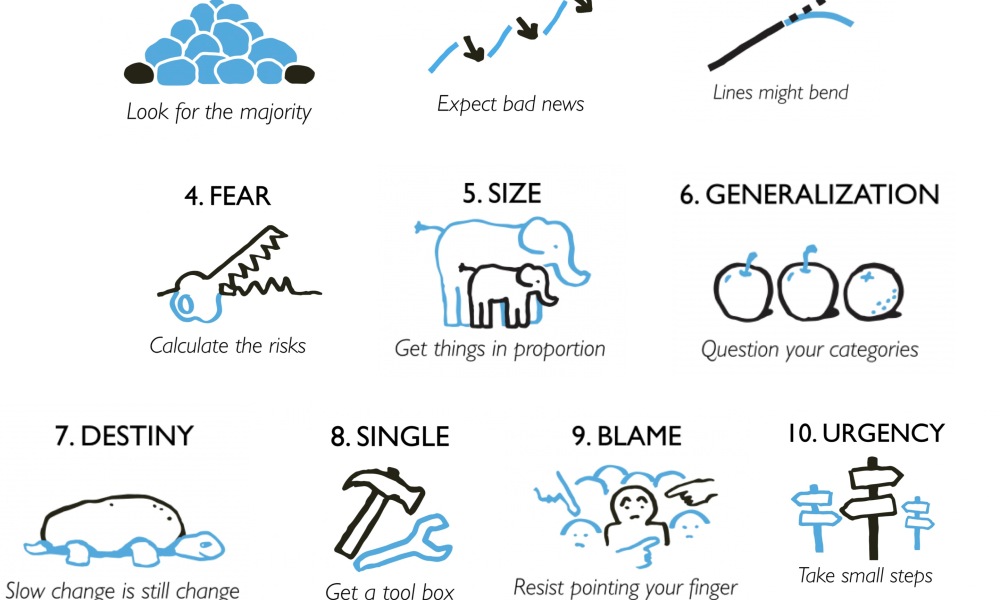 I am one of the ignorant who first learned about Prof Hans Rosling – physician and Professor of International Health at the Karolinska Institutet – only upon his death last year. When the book he had worked on with his son and daughter-in-law was published posthumously, it was very well received and even Bill Gates has recommended it as one of five books to read this summer.

I finished the book in – what was for me – record time. Partly, it was because the book is very accessible and engaging, even though it is partly about statistics. The chapters are liberally sprinkled with anecdotes from Prof Rosling’s very full and meaningful life. One example: he had gone to Bengaluru, India as a medical student and sat in a small group tutorial. The consultant had put up an X-ray which he quickly identified as showing kidney cancer, but he held back from volunteering to comment as he did not wish to show off. He was subsequently amazed when the Indian students not only diagnosed the condition, but also confidently discussed the case and its management in a way he thought only qualified specialists would be able to do. His summary thought in the book is worth quoting: “How could they know much more than me? Over the next few days I learned that they had a textbook three times as thick as mine, and they had read it three times as many times. I suddenly had to change my worldview: my assumption that I was superior because of where I came from, the idea that the West was the best and the rest would never catch up.”

Factfulness is the Roslings’ attempt to convey their perspective that the world should be viewed in a more objective and fact-based way, and distills what they feel are ways to overcome 10 “dramatic instincts” that distort our perceptions and hence our thinking about the world around us. The image below is a compilation of the 10 instincts from the Gapminder website (Gapminder Foundation was co-founded by Hans Rosling).

I reflected on “Negativity” in which Hans Rosling explained that bad news is more likely to reach us while gradual improvement is not news, things can be both bad and better (the first is a “level” while the second is a “direction of change”), and that we should “beware rosy pasts” (i.e. that we often view the past with rose-tinted glasses).

This is specifically applicable to the field of medicine, and of course to infectious diseases. We frequently highlight many threats that appear existential – a global pandemic that will wipe out large chunks of the population, seemingly increasing number of outbreaks each year, and antimicrobial resistance that seems impossible to control are three of the more common infectious diseases issues. In the medical specialty, senior infectious disease physicians sometimes view the trainees as being less experienced than they ever were at that stage of training, or more prone to making errors in judgment and management when they were at a similar level.

Objectively, however, we are better able to handle a global pandemic than we were a decade ago (even though large chunks of the population may still get wiped out now), we understand antimicrobial resistance a lot better today and have more options than before (I recall that when I was a house officer, if a patient had methicillin-resistant Staphylococcus aureus – MRSA – infection and we could not for one reason or another use vancomycin, we would really be stuck for options. Today, there are more alternative antibiotics for MRSA than the fingers of one hand, and the primary issue is one of increased cost). As for outbreaks, two reasons there are more outbreaks reported today is that we are now better able to detect them, and there is greater transparency in reporting in most countries. The situation is still bad of course, but the direction of change is for the better.

How about the infectious disease trainee physicians of today? This seems to be a subset of the “kids these days” syndrome. Whichever way I look at it, the trainees of today receive better training (and also during their time as house/medical officers), have access to more and better information, and often deliver a higher standard of care than I ever did as a trainee. There is also greater depth and breadth in the field today – different local infectious disease physicians sub- or cross-specialise in areas such as infection control, transplant infections, antimicrobial stewardship, and even public health. There is the question of having less experience because the case-mix of today’s hospitals are different from more than a decade and half ago, and because working hours and load are better regulated today. In this specific case of infectious diseases training, the stage-for-stage experience gain is simply not worth the tradeoff. Why would we ever wish to return to a time when typhoid fever was far more prevalent, or when foreign construction workers would be hospitalized on a weekly basis for typhus because their living conditions then were terribly unhygienic, or patients with HIV would recurrently present with florid opportunistic infections and cancer because there was no antiretroviral therapy or when most could not afford them?

An anecdote to share: when I was a house/medical officer, we were often berated for poor clinical history-taking and examination skills (this probably still sounds familiar to several house/medical officers in Singapore today). The senior physicians would often recount a past where the art of medicine was “less debased”. At the extreme end, the example of Prof Gordon Arthur Ransome tasting urine or other unidentified patient fluids to make a diagnosis would be trotted out, along with other stories of Prof Seah Cheng Siang’s great clinical acumen (some examples here).

When I started as an infectious disease trainee, we were colloquially referred to as “the summarisers of case notes”, because the course of our clinical work often required us to plough through stacks of the patients’ prior hospitalization and clinic notes, some of which stretched back at least a decade. The majority of these notes were sparse, lacked details, and were poorly informative, including entries by prominent physicians (during my time as a medical officer/trainee) in their younger days. The notes would not have passed muster more than a decade ago, much less today. My own takeaway was that – charitably – perhaps the senior physicians during my early career wished that we would continue to improve rather than be held to the real standards of the past. There are great physicians in every generation, but the overall standard has and continues to improve.