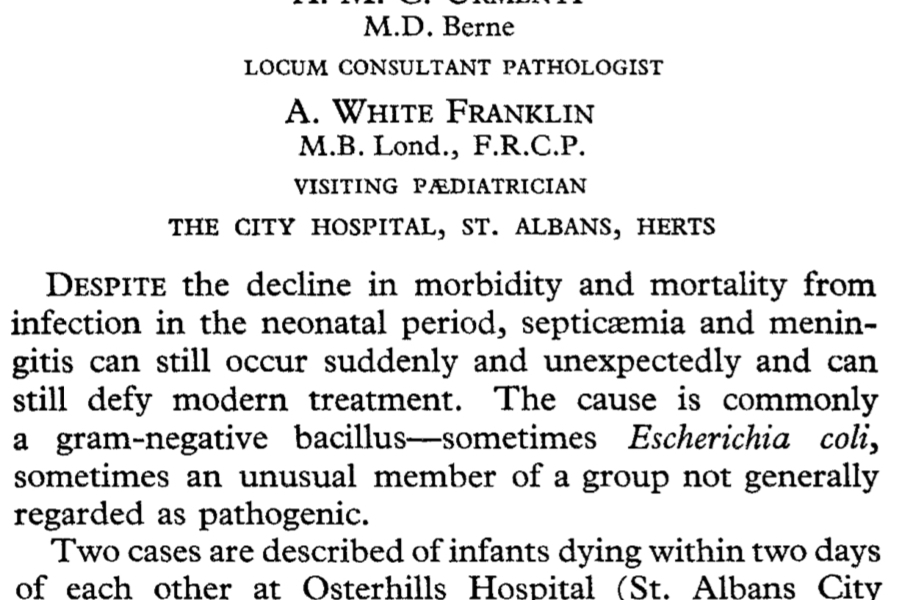 By a curious twist of coincidence, I received two notices of powdered infant formula milk recall due to Cronobacter sakazakii today. The first was from the SGH Microbiology blogger, who forwarded the abstract to a paper published by Chilean scientists in Frontiers in Microbiology last month. Following the June 2017 alert issued by the Chilean Ministry of Health on the finding of C. sakazakii in Pediasure (Abbott) products, the scientists had looked for the bacteria in commercial liquid and powdered milk formulas from 4 countries (Chile, Singapore, Holland, and United States), and were able to detect its presence in samples from Singapore and Chile.

The second was the Agri-Food & Veterinary Authority of Singapore (AVA)’s recall of a batch (09117R1) of Dumex Mamil Gold Step 1 infant milk formula after finding C. sakazakii in two tins that were tested. There are not many other details given.

It is crucial to understand that powdered infant formula is not sterile. Current manufacturing processes are such that it is impossible to guarantee sterility, and this is accepted at the global level. But precisely because of the risk of infant infection and death from contaminated powdered infant formula, it is one of the most tightly regulated and tested industries. The World Health Organization had convened three committees to study the issue of bacterial contamination of powdered formula milk between 2004 and 2008 (the 2006 report, which is relevant to infant formula, is available here), with guidelines issued to cover both manufacturing and storage/preparation at home. Individual countries have also come up with their own regulations and guidelines, for example, here is New Zealand’s in 2015, and our AVA’s is buried in an extensive document (sections 251-254). AVA has publicly available microbiological standards for powdered milk, which presumably this batch of Mamil Gold did not meet.

Now for the bug: this tongue twister of an Enterobacteriaceae, what is it exactly? It is an interesting history of human discovery and understanding of a bacterium – the more I read the less I seemed to understand. But perhaps the most accessible article (even for doctors) that puts the microbiological (and historical) aspect together – along with a few waspish comments about his detractors – is the one written by Dr John J Farmer III in 2015 in Frontiers in Pediatrics. The organism was first described as a “pigmented coliform” or “yellow-pigmented coliform” up until 1980 (during which it was often misidentified as various Enterobacteriaceae, especially the Enterobacter cloacae complex), when Dr Farmer and co-workers proposed to rename it Enterobacter sakazakii, in honour of Japanese microbiologist and taxonomist Dr Riichi Sakazaki. In 2007, with the use of more advanced techniques including DNA sequencing, Dr Carol Iversen and colleagues showed that “Enterobacter sakazakii” actually comprised multiple species of a group of bacteria that was sufficiently unique to warrant having its own genus, thereby changing the nomenclature to Cronobacter spp., one species of which is Cronobacter sakazakii. I could not find the rationale for the choice of the genus name “Cronobacter” however – it would be interesting to know why this name was chosen (Update: a colleague shared that the reason for the name was in the Iversen paper. In view of the high morbidity and mortality of C. sakazakii infections in neonates, the genus was named after the Greek titan Cronus, who swallowed his own children to avoid the prophecy that one of his sons would overthrow him).

The natural habitat of Cronobacter spp. is not known today (although plants are suspected), but it can be detected in a wide variety of foodstuff in addition to powdered milk, as this wide-ranging study (which sampled spices, dried herbs, fresh vegetables, and soil from various sources including sandboxes) in Japan showed. Its presence in powdered milk and dried food is a particular issue as the genus as a whole has high tolerance to dessication (and various strains are also heat resistant, although the vast majority are unable to survive at >=70 degrees Celsius).

Historically, the first Cronobacter sakazakii isolated from a clinical specimen was in 1953, from a sample labeled “abdominal pus”. The first described case of neonatal meningitis caused by this organism occurred in 1958 at the current St Albans City Hospital in England, published in the Lancet in 1961.

Screenshot from the Lancet, 11 February 1961 edition.

C. sakazakii is an opportunistic pathogen and a very rare cause of human disease. There are probably just over a handful of “true” adult infections described in the medical literature, the risk factors of which are poorly understood. Pre-term and low-birth-weight infants are particularly vulnerable to infection by this organism, where it is isolated most commonly in conditions such as sepsis, meningitis, and necrotizing enterocolitis (where its actual role as a pathogen is unclear). Isolates of C. sakazakii belonging to clonal complex 4 are particularly associated with severe disease including meningitis. The mortality rate in such cases exceeds 50% and survivors commonly suffer long-term developmental sequelae.

Although contaminated powdered infant formula is often pinpointed as the cause of neonatal infection, it is important to understand that environmental contamination also plays a key role. In this case in the United States, 2016 where a preterm infant girl was infected through expressed maternal breast milk (and eventually suffered spastic cerebral palsy with global developmental delay), the source was the mother’s personal breast pump kit, which had not been properly sanitized in between use. In a retrospective review of a prolonged 3-month outbreak involving 18 neonates in a French hospital’s neonatal ICU, the use of genomic sequencing revealed that there were actually 4 distinct clusters of C. sakazakii isolates throughout the period. Implicit in the story is the role of environmental contamination and need for improved infection control practices.

The associated clinical problem – shared with other Enterobacteriaceae – is that of antimicrobial resistance. Here for instance is a report of a C. sakazakii isolate from a diseased chicken in 2015 in Shandong, China, that harboured both the carbapenem resistance gene (NDM-9) and the polymyxin resistance gene (mcr-1). The logical recommendation is to perform antibiotic susceptibility testing on all clinically significant C. sakazakii isolates.