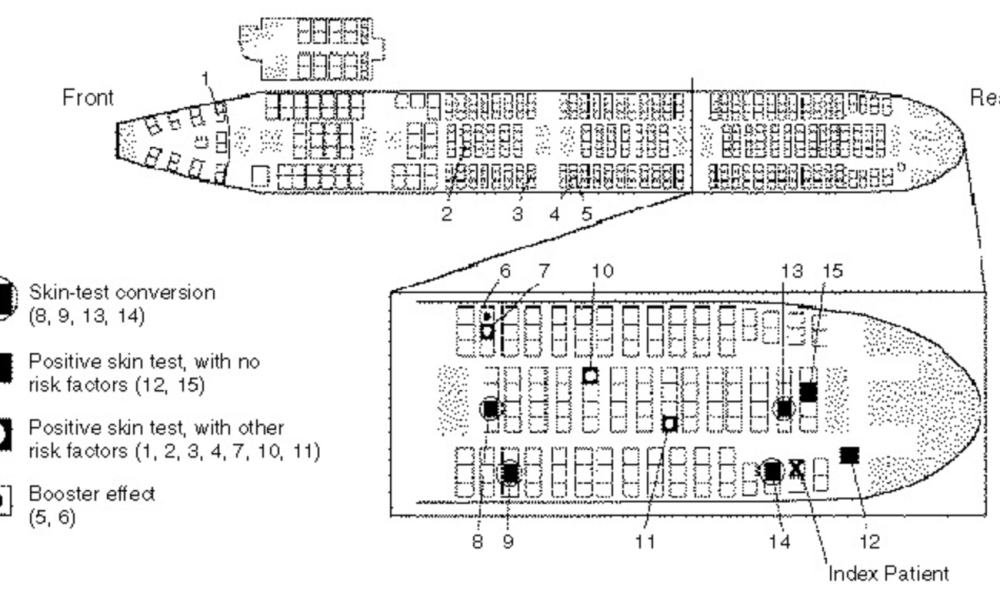 A small update to a post 3 years ago in air travel and tuberculosis. There has not been much in the way of new evidence since 2015.

There was a publication in 2017 by the Japanese, detailing contact investigations on 42 index TB cases that had boarded a plane between 2012 and 2015, resulting in 651 contacts screened with interferon gamma release assays (IGRA). 3.8% tested positive – but only 1.0% tested positive for the subset aged between 0 and 34 years (205 contacts), which was similar to IGRA positive in Japanese medical students (presumably virtually all below 34 years of age). None of the contacts were known to have developed TB subsequently. The median flight duration was 11 hours (range: 6-12 hours). This work adds to and supports the existing literature’s conclusion that the risk of acquiring TB as a result of a flight exposure – whatever the duration – is very low.

Researchers at the European Centre for Disease Control and Prevention (ECDC) published an updated systematic review on TB transmission on aircraft in 2016. There were only 21 reports included – the latest publications were in 2012 – involving smear-positive index cases with TB, of which only 1 provided substantial documented evidence of TB transmission (in 14 reports, no apparent transmission occurred). This study was published 1996, and only passengers in the same aircraft section were potentially infected (figure from the NEJM paper below).

The conclusion was that the risk of TB transmission aboard an aircraft was very low – 0.1% to 1.3% of aircraft contacts on flights exceeding 8 hours, with the highest risk occurring in passengers seated within 2 rows of the index case. However, the quality of evidence was generally very low. One useful byproduct of the systematic review was the comparison between ECDC, World Health Organization, and CDC guidelines (below). Most other countries – including Singapore – tend to have guidelines that are identical or else very similar to one of these three.

What are the implications? Firstly, because of the low risk of TB transmission on board an aircraft and the difficulty in contacting passengers on board a flight as well as organizing the screening, contact investigations for a person subsequently diagnosed to have TB should only be initiated for passengers within 2 rows of that person if:

What about pre-travel diagnosis of TB? There has been no change to date. For infectious (sputum smear positive) or potentially infectious (smear negative but either molecular probe or culture positive) persons with TB, at least 14 days of multidrug treatment should have lapsed before permitting flights of any duration. An exception can be made for those who need to fly urgently (i.e. for transfer to a tertiary care facility) – in this case, the TB programme or health authority will have to liaise with the airline or transport company to facilitate this.