An unusual post in the Sports pages of the Straits Times today, highlighting the finding of superbugs in the Rio de Janeiro bay where the 2016 Olympics sailing and surfing competitions will be held (unfortunately behind the ST pay wall). It is a remarkable thing to find an article on antibiotic-resistant bacteria in the ST, much less the Sports section! 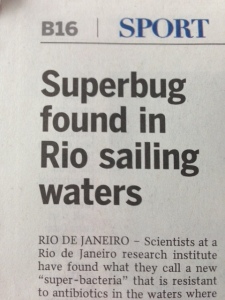 A quick search through the internet revealed that the superbug in question was actually bacteria that produce the Klebsiella pneumoniae carbapenemase (KPC), an enzyme that breaks down one of the most powerful classes of antibiotics used virtually exclusively in the hospital setting – carbapenems. The bacteria were found at several spots along the Carioca river as well as Flamenco Beach. It is likely that the bacteria are present there because of the dumping of human sewage – including hospital sewage – into the bay.

This is not the first time that carbapenemases have been reported from the sea – the VIM-2 (stands for “verona integron-encoded metallo-β-lactamase”) carbapenemase was recently found in squid from a supermarket in Canada, reported in the July 2014 issue of Emerging Infectious Diseases. The squid purportedly came from South Korea.