I have not commented on the Ebola epidemic for a while. But things are finally looking up. The number of new cases reported each week has continued to fall in Guinea, Liberia and Sierra Leone, while Mali has now been declared free of Ebola after 42 days without a new case of Ebola reported. The World Health Organization has an excellent situation report site which is very detailed and up to date, and I have taken the liberty to copy and reproduce below the map that was last updated on 21st January 2015: 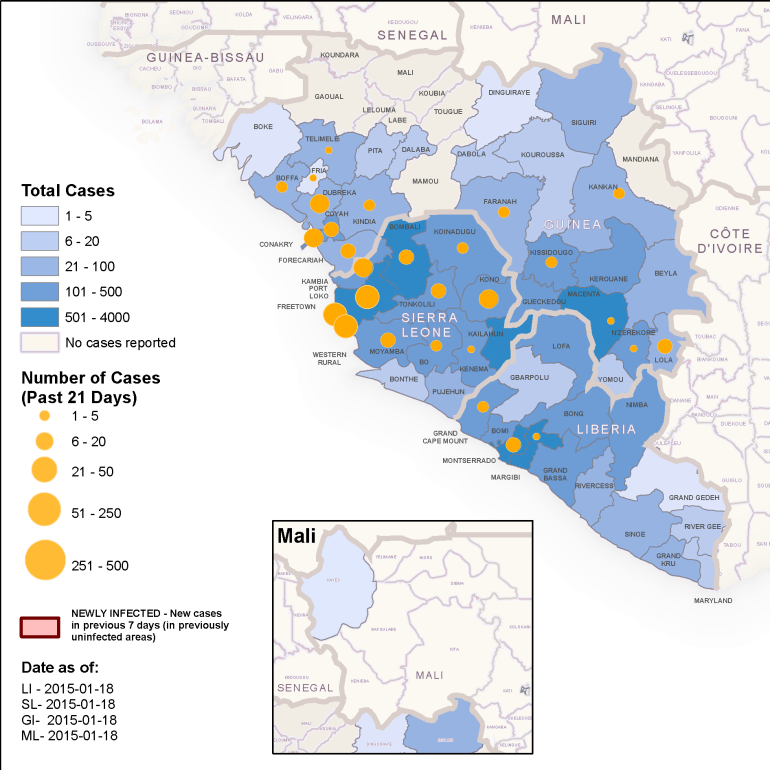 It is clear that the fall in cases is not due to factors such as overwhelmed laboratory diagnostic capability, losing track of contact cases (of confirmed Ebola cases), or distrust of the official medical services (resulting in infected persons hiding away rather than seeking treatment in clinics and hospitals). Here is one (of several) news report – from the Washington Post – highlighting empty U.S.-built Ebola treatment centres in Liberia.

To date, there are 21,689 Ebola cases, with 8,626 deaths. This number tops all past Ebola outbreaks combined by severalfold. Even with the most optimistic projections, it will take until June  2015 before the Ebola epidemic ends in Liberia, and probably several months more for Sierra Leone.