There is currently a bit of buzz about Streptococcus agalactiae (which is also referred to as Group B streptococcus, as it is the only Streptococcus species that belongs to Lancefield Group B), hence I had to update myself about this organism in a hurry. It is a Gram-positive coccus (just like MRSA), usually present as chains of cocci under the microscope. The chief blogger of SGH Diagnostic Bacteriology’s blog very kindly provided some plate photos for use in this post. 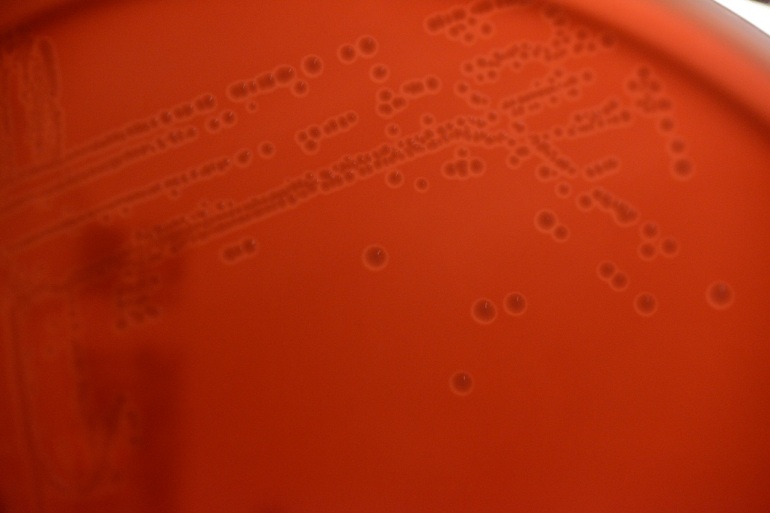 Attempting to demonstrate hemolysis around each colony of Group B streptococcus.

The organism colonises human gastrointestinal and genitourinary tracts (15-30% of healthy adults). It is strongly associated with life-threatening neonatal infections – including bacteremia and meningitis. In many parts of the world, universal Group B streptococcus (GBS) screening in pregnant women is recommended. For example, the U.S. CDC recommends universal vaginal AND rectal screening for GBS at 35 to 37 weeks of gestation. The results in terms of preventing neonatal infection – as can be seen from the chart below (screen grab from the U.S. CDC guidelines) – are excellent. While there are still cases of neonatal GBS infection in Singapore each year, the incidence has been low since the 1990s (unfortunately the link is only to the abstract).

Rates of neonatal GBS infections in sentinel sites in the U.S. Note the dramatic fall in rates of early infection since the 1990s.

In adults, it is usually associated with urinary tract infection, although in relatively immunocompromised or older adults, it can cause more invasive infections such as cellulitis, bone and joint infections, bacteremia, and rarely meningitis. Most carriers of GBS do not develop disease, as can be seen from the many reassuring messages from hospitals that screen for carriage in pregnant women. There has been a trend towards more GBS infections occurring in non-pregnant adults over the last couple of decades as reported from many parts of the world, including Chiang Mai (Thailand), Reunion Island and Hong Kong, albeit mainly in relatively immunosuppressed hosts (obesity, diabetes, liver disease, cancer, etc.).

Interestingly, GBS also affects animals and fish, causing bovine mastitis as well as severe invasive disease outbreaks in Asian freshwater ornamental and food fish (especially the Nile tilapia). There is a well-written paper published in Nature Communications in 2014 that explored the relationship between human and non-human strains of GBS. Perhaps the main issue is that most of the isolates were from Europe and Australia (Asia not represented essentially), and non-human isolates were mainly from cattle, with only a single fish isolate. It takes a little bit of effort to get into the figure below, which is from the manuscript, but essentially, the “hyper-virulent” clonal cluster 17 (CC17) isolates – “hyper-virulent” because these strains cause the majority of neonatal meningitis in Europe – are mostly capsular serotype III, and the acquisition of tetracycline resistance (presented as maroon branches in the 4 flanking phylogenetic trees appears to drive the population structure of human isolates.

What about fish then? Here is a separate paper looking at GBS in fish and marine animals (including seals and dolphins), showing that major clones of GBS associated with human disease can also be found in these fish and animals, including ST283 serotype III strain in fish from Thailand. Interestingly, investigators from Hong Kong had reported this exact clone (ST283 with serotype III-subtype-4) from invasive GBS in non-pregnant adults in the period between 1993 and 2003, suggesting that the human GBS strains in this part of the world might well be different, and may possibly be associated with fish in the diet. There was no report on tetracycline susceptibility testing in the paper from Hong Kong, unfortunately.

Is fish in the diet associated with human GBS colonisation and infection? After all, finding identical sequence types (ST283) in Thailand fish and Hong Kong humans hardly constitutes any sort of proof. Here, it is good to review an amusing study looking for risk factors of GBS acquisition among college women and men living in a dormitory at the University of Michigan in 2001. As might be expected, an increase in sexual activity also increased the risk of GBS acquisition. Curiously enough, however, eating fish was associated with a sevenfold (7.3 times) higher risk of acquiring GBS, after controlling for sexual activity of the participants!

What is the data from Singapore? Beyond the various case reports of unusual GBS infections, a report on adult meningitis published by the National University Hospital briefly detailed an outbreak of GBS in 1998, with 3 cases of GBS meningitis. The isolates from these 3 cases were subsequently shown to be ST11, a sequence type/clone that is different from ST283 by just a single locus.

It has been pointed out to me that Streptococcus agalactiae is not the only Group B streptococcus. Streptococcus halichoeri is the other member of the group. A write up can be found in the SGH Diagnostic Bacteriology blog here.