These pair of hands belong to a young woman who had fever for 2 days associated with sore throat.Her firstborn son had presented with similar symptoms a week ago. She had incidentally just discovered that she was pregnant, this being 6 weeks after her last menstrual period ending. 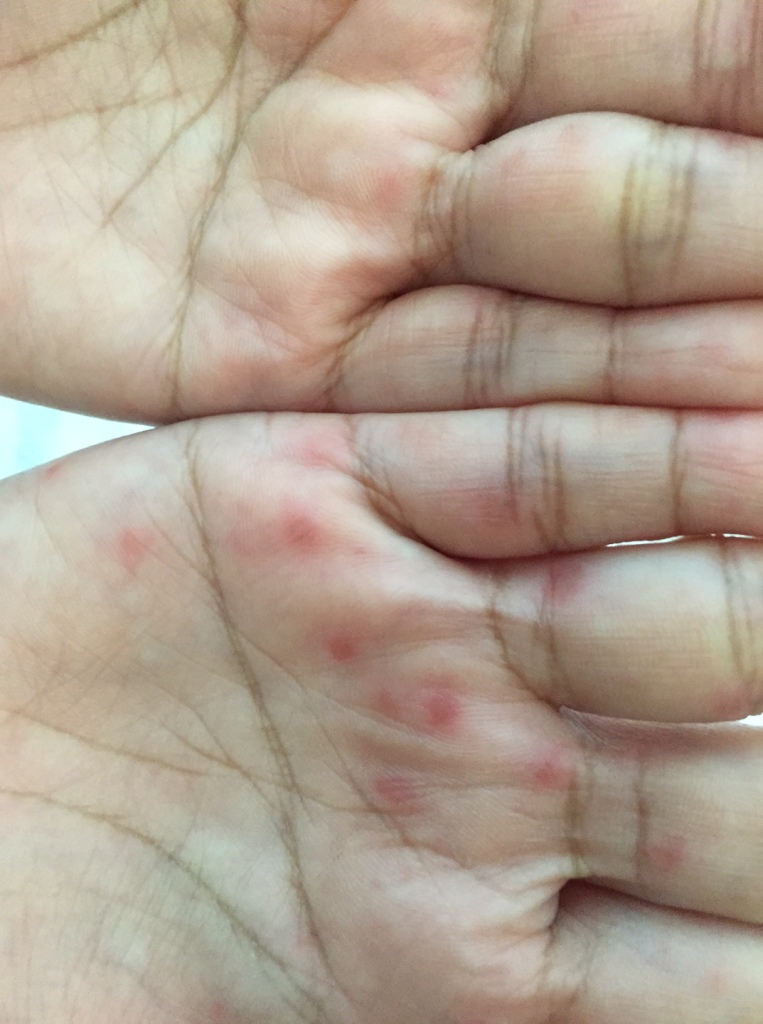 Lesions on the hands of a young pregnant woman.

Question: What is the diagnosis and what would be the reasonable advice with regards to her pregnancy?

As many have pointed out, this is classical hand foot and mouth disease (HFMD). The disease complex is caused by a variety of coxsackie and enteroviruses, of which enterovirus (EV)-71 is the most feared because it can also cause a concomitant viral encephalitis. HFMD most commonly affects young children (especially those going to childcare centres and kindergartens in the local context), but can also affect adults who have not previously been exposed (or who have lost their immunity for one reason or another). There is no specific antiviral treatment for this condition, which is self-limiting.

MOH Singapore maintains a webpage which lists childcare centres and kindergartens where there are ongoing outbreaks of HFMD – defined as >10 cases or an attack rate of >13%, and prolonged transmission >16 days. It can be accessed here.

The viruses that cause HFMD do not appear to affect pregnancy (at any stage) in any way, except perhaps to – very rarely – cause miscarriage during the first term of pregnancy, and to result in infection of the newborn. Again, the latter usually just results in mild and self-limiting disease. The KK Hospital information page here is rather alarmist – the NHS FAQ is better and and more informative.