In the previous post, we discussed the situation where the fever has resolved. How long should antibiotics be continued? If the cultures are negative, antibiotics can be stopped immediately with neutrophil recovery (the situation where neutropenia remains persistent is controversial and was also discussed previously). There is a tendency locally to continue intravenous antibiotics for a while longer or to convert to a short (4-7 day) course of oral antibiotics – which is unnecessary. If the cultures are  positive, the decision to stop (assuming neutrophil recovery) is based on the site of infection and the organism. If it is bacteraemia secondary to mucositis, which is most commonly the case, antibiotics can safely be discontinued after 7-10 days. The “magical” number of 14 days should be reserved for organisms such as Staphylococcus aureus (or its cousin MRSA).

The more problematic situation is where the fever does not resolve, which is not uncommon in patients with haematological conditions post chemotherapy or allogeneic stem cell transplantation. In a large proportion of such cases, the patient remains relatively well albeit neutropenic, and the (often repeated) cultures are negative. During my “formative” years in the early 2000’s, the practice (and indeed, the institutional guideline) was to escalate antibiotics every 48 hours or so. As an example, a patient would receive cefepime empirically upfront, and have it escalated to meropenem after 48 hours, with amikacin and/or vancomycin thrown in for good measure subsequently. Empirical antifungal therapy after 5 days or so was also not uncommon.

We have since achieved greater enlightenment. Persistent fever where the neutropenic patient does not deteriorate clinically and where cultures are negative (or positive for a pathogen effectively covered by the antibiotic prescribed) does not equate failure of antibiotic therapy. This is reflected in the changes in the guidelines of the Infectious Diseases Society of America (IDSA), where a 2002 recommendation to consider adding vancomycin as well as wait at least 5 days before changing the antibiotic regimen if the patient is stable was replaced in 2010 by a recommendation against changing the antibiotic regimen altogether. 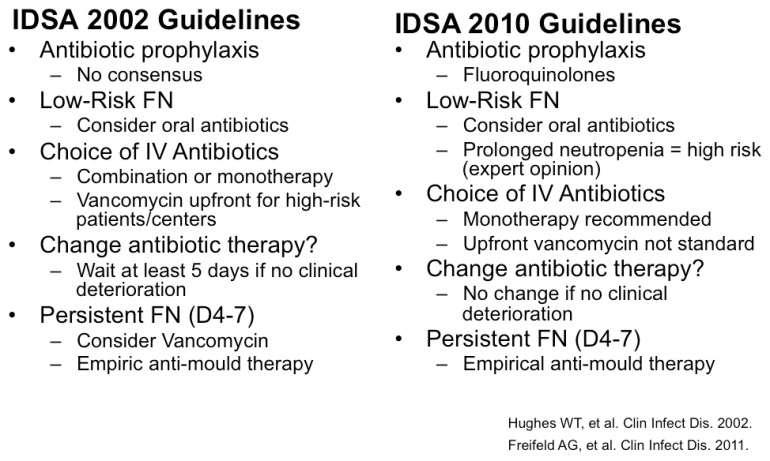 Changes between the 2002 and 2010 IDSA guidelines for febrile neutropenia.

The Europeans appear to have recognised this point earlier, and their guideline similarly recommends against escalating antibiotic regimen for fever alone. Some European centres – including the Erasmus University Medical Centre in Rotterdam, Holland – have been pushing the envelope for years. In a 2009 publication, the investigators from Erasmus MC reported the safety of a 3-day empirical imipenem regimen in haematological patients: the antibiotic was discontinued if no infectious aetiology was found, regardless of whether or not fever had resolved. The overall mortality was very low (3.6% at 30 days after neutrophil recovery), but their antibiotic prophylactic regimen was remarkable (although not unique for Europe) and worth describing in a separate post.

Locally, it has taken many years for guidelines in our public sector institutions to reflect the change in understanding (i.e. to recommend against escalation of antibiotic therapy in the face of persistent fever alone), and compliance is still far from absolute given the psychological difficulty of persisting with the empirical antibiotic regimen when the patients are “not getting well”.

In the situation where there is actual clinical deterioration (i.e. development of new symptoms, hypotension, etc), there is no contention against the need to escalate supportive and antibiotic therapy rapidly after a comprehensive diagnostic work-up.

Finally, one of the most important breakthroughs in the 1980s was the recognition that persistent febrile neutropenia – even in the absence of other/new clinical symptoms – was commonly due to invasive fungal disease. Invasive mould infections in particular appeared to present after 4 days of fever in profoundly neutropenic patients (although the way I wrote the above is probably a bit misleading conceptually), and strategies were developed to deal with this, which I will try to describe in the next post on fungal infections in patients with febrile neutropenia.