A young man (in his 30s) from South Asia presented with progressively worsening headache over 4 weeks. This was associated with low-grade fever over a week, followed by diplopia (double vision) over the past 4 days. He had previously been well, with no medical co-morbidities. There was no significant contact history. He had received some antibiotics in his home country without any clinical improvement.

Clinical examination revealed a somewhat lethargic young man who nevertheless responded appropriately. He was febrile at 38 degrees Celsius, and had a right VI cranial nerve palsy. There was no neck stiffness and no evidence of photophobia. Representative cuts of the CT head are shown below. The chest X-ray is clear.

CT head (non-contrast) of the young man with headache. 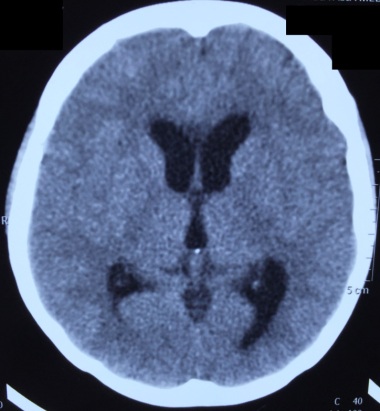 CT head (non-contrast) of the young man with headache.

The CT head showed a ventricular system that is considerably dilated for a young man of his age, suggesting hydrocephalus. The brainstem cut is somewhat abnormal on retrospect, but would be difficult to pick up without any accompanying knowledge about the case.

The major differentials for a young patient from South Asia presenting with a prolonged history of headache and fever, accompanied by at CT showing hydrocephalus, would be tuberculous meningitis. The differential is cryptococcal meningitis, but that is less common (compared to TB meningitis) in a young healthy man, and is moreover not specific to South Asia.

Ideally, the patient should undergo lumbar puncture, with CSF extracted for the workup of tuberculosis (including AFB smear, mycobacterial culture, and TB PCR) and cryptococcosis (CSF cryptococcal antigen), besides the usual work up for bacterial pathogens and cytology (to exclude a malignant process, rare as that is). The value of CSF adenosine deaminase seems less clear that its corresponding use for TB pleurisy.

The yield for TB work-up from the CSF is generally poor while the morbidity and mortality from the disease is great. If clinical suspicion is high, empirical anti-tuberculous treatment should be started while waiting for the test results.