“Slavish” Adherence to Antibiotic Guidelines Can Result In Medical Negligence

The following court case, described in the Australian Doctor (behind a paywall) was brought to my attention by an old friend. 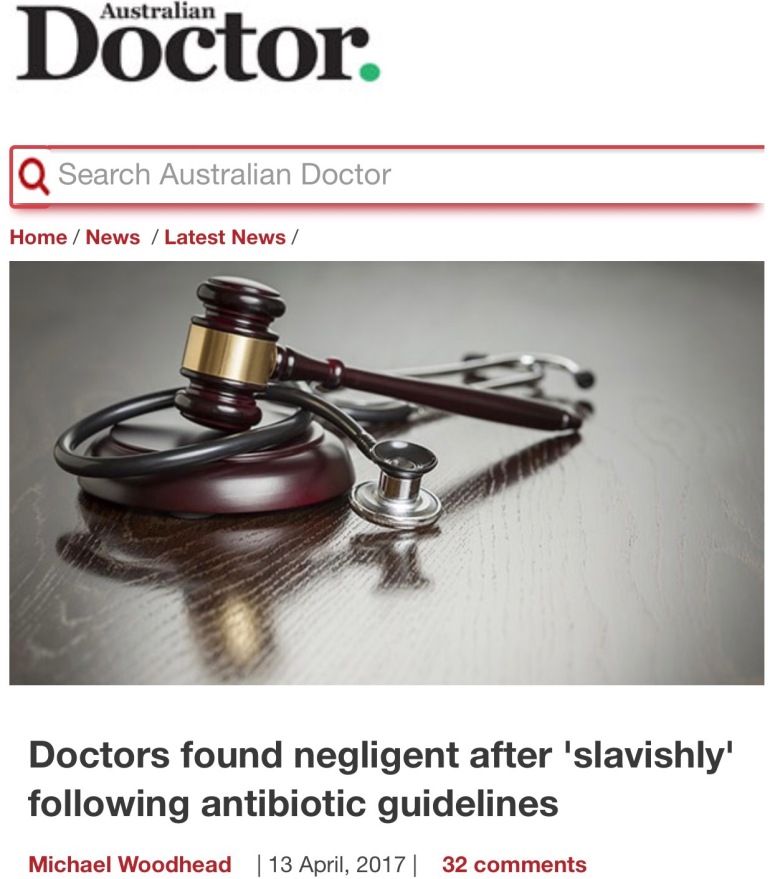 Essentially, a young boy slipped on wet concrete and developed an open fracture of his thumb in 2011. He was treated at a Sydney hospital, receiving IV flucloxacillin as the antibiotic stewardship guideline-recommended prophylaxis before being discharged with oral amoxicillin-clavulanate. Some time later, the thumb became gangrenous and an amputation was carried out. Anaerobes were apparently cultured.

The judge ruled for the boy’s family against the hospitals, agreeing with their medical expert that “there were special circumstances” that meant that the hospital’s antibiotic guidelines were not applicable in this particular case. The judge also questioned whether such guidelines were meant to be followed “slavishly, as in a box-ticking exercise”, or required interpretation on a case by case basis based on the doctors’ experience.

The family’s medical expert apparently suggested that if a broad spectrum antibiotic “such as gentamicin” had been added to the initial antibiotic prophylaxis, the amputation might have been averted. This is technically incorrect (gentamicin has minimal anaerobic activity), but it does not diminish the overall point that at the end of the day, guidelines and clinical decision support systems (CDSS’) are just that – and not an absolute substitute for clinical judgment.

There is an underlying insidious and perhaps paradoxical issue here, however. As we depend more and more on evidence-based medicine, guidelines, and especially CDSS’, how do we prevent the gradual deterioration of clinical judgment and experience in our and subsequent generations of physicians?