I was directed to this recently published Science article by a Lee Kong Chian School of Medicine clinician-scientist while we were discussing the Dengvaxia debacle. As highlighted in a previous post, Sanofi Pasteur had reported that dengue-naive people would be at higher risk of a more severe infection if they were infected with dengue following vaccination with their Dengvaxia vaccine. This was postulated to be largely attributable to the phenomenon of antibody-dependent enhancement (ADE) of dengue infection, with the vaccine acting as a “first infection” for dengue-naive recipients.

In vitro and in a mouse model, researchers were able to show that there was a “sub-neutralizing” range of antibody titres in which ADE could be observed, resulting in more severe dengue infection. Could this actually be observed in humans? It seems we now have an answer, thanks to a remarkable 13-year (since August 2004) paediatric dengue cohort study in Managua, Nicaragua – the largest Central American country. In this cohort – where new 2-year-old children were enrolled each year, while older children “exited” at age 15 – blood was drawn every year from the participating children, and those who became febrile and visited the health centre from where the study was coordinated were also evaluated clinically and via blood tests (both PCR and a panel of antibody tests) for dengue.

A total of 6,684 children with at least 1 dengue antibody titre measurement available were included in the study population. There were 645 dengue infections in this population occurring between 2004 and 2016, of which 27 were not included for analysis purposes because the children either had no antibody titre measured in the preceding year, or there was no data on disease severity (3 cases).

Screenshot from the Supplementary Materials section of the dengue ADE paper in Science.

Just under half (295) of the dengue infections were judged to be “primary dengue” (i.e. first time infection in a dengue naive child) while 323 were secondary infections. There were 2 clinical severity criteria used because in 2009, the World Health Organization (WHO) moved away from “dengue haemorrhagic fever/dengue shock syndrome” criteria of 1997 to “dengue with warning signs/severe dengue”. 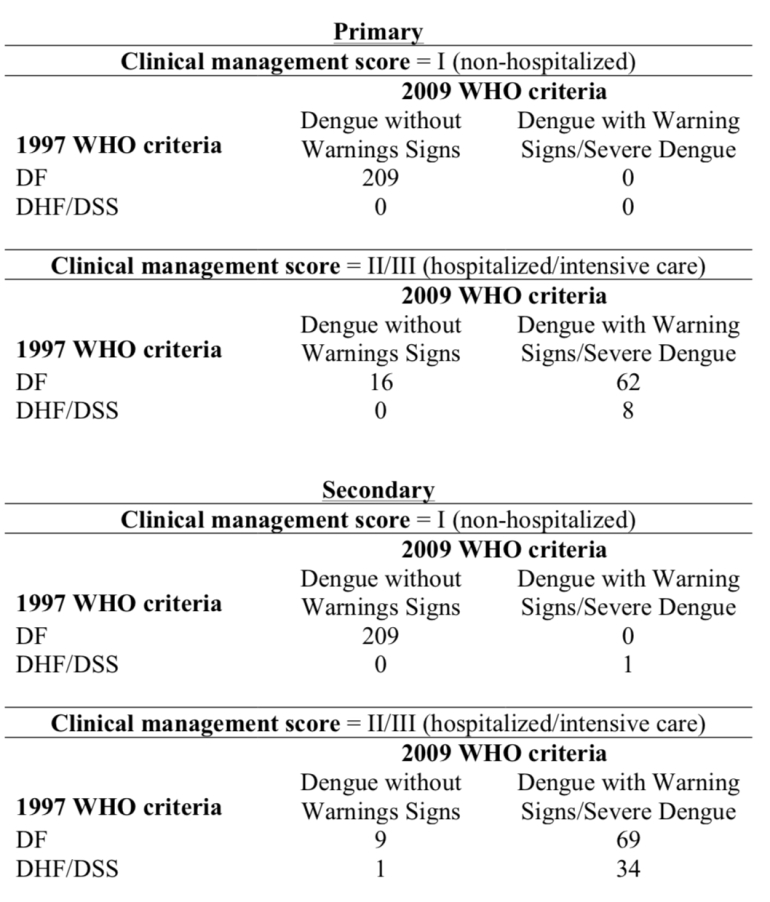 Screenshot from the Supplementary Materials section of the dengue ADE paper in Science.

Screen capture of part of a figure from the Science dengue ADE paper.

Perhaps the figure shown above is the clearest. Using continuous hazard ratio curves, the researchers showed that the risk of ADE resulting in more severe dengue infection was high except when dengue antibody titres were high, with a peak as mentioned between 1:21 and 1:80. One should note that the results are much clearer for the older classification of dengue haemorrhagic fever and dengue shock syndrome, but less apparent for the 2009 classification of dengue with warning signs/severe dengue (which is broader in scope and will include severe dengue cases caused by events/mechanisms other than vascular leak).

What the results suggest is challenging for vaccine makers. High dengue antibody titres appear to be protective, but if a future vaccine induces antibody titres near the peak (1:21 and 1:80) ADE titre range, or if immunity post-vaccination drops to this range, then these individuals will be at high risk of developing severe dengue if infected.