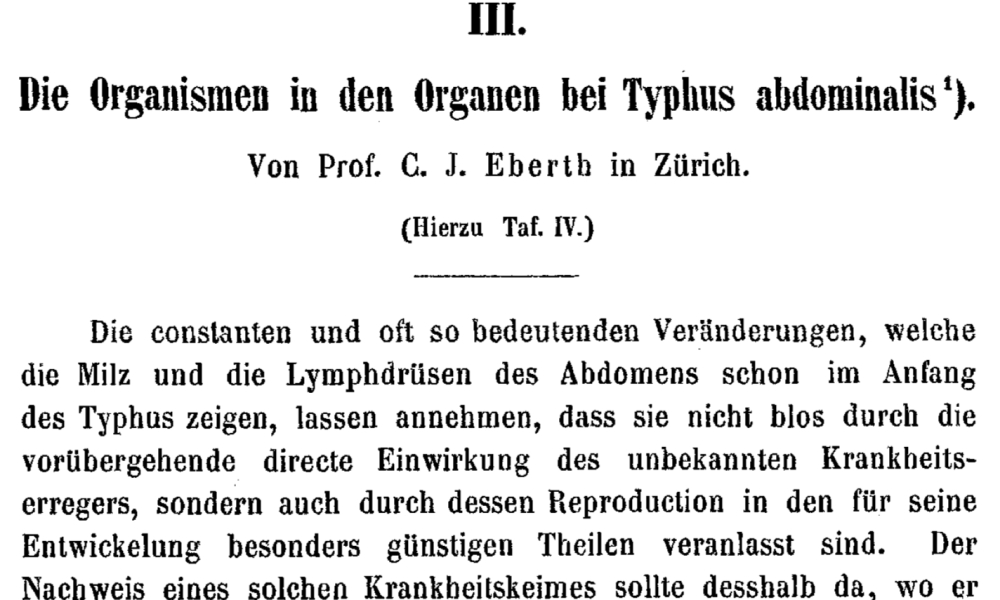 There were 18 cases of typhoid fever reported in Singapore over 3 weeks, with the onset of symptoms between 13th July and 4th August this year. This is a far larger number than usual – the disease now occurs primarily in returning travelers or migrant workers from countries where the bacterium remains endemic. The cause of this outbreak – if known – has not been publicly reported. However, the number of cases appears to have declined rapidly.

The term “typhoid” means “typhus-like”, and also appeared to be used to describe an agitated state during the febrile period, as one can surmise from the oldest available use of the term online. Typhus was also better known at that time, and used to describe not just outbreaks of fever, but any fever associated with great prostration. It was only later that physicians sought to distinguish the various fevers as separate diseases, hence describing a distinct febrile illness as “typhoid fever” meaning “typhus-like fever”. One old name for typhoid fever was “typhus abdominalis”, meaning “typhus originating from the abdomen”.

While looking up old articles, I particularly enjoyed this series of lectures compiled in the British Foreign Medical Review in 1836, delivered by a Parisian doctor Prof M. Chomel. Prof Chomel divided the course of typhoid into 3 major stages, with symptoms first typically starting off as headache, abdominal pain and diarrhea. The first period is characterized by apathy and headache, while “rose-coloured spots” appear in the second period typically between the 7th to 9th day, and occasionally as late as the 36th day (“in order to be characteristic, there should be at least 15 or 20; no value can be attached to 2 or 3”). Hemorrhage from the bowel also occurs during this period. In the third period, patients either recover or their symptoms become aggravated and die. Peritonitis occasionally or the comatose state precede death. All this sounds familiar? The pathology described in the article was also remarkable – all of these in the time before the pathogen was ever isolated.

It was only in 1880 that the organism that caused typhoid fever was identified. The pathologist Prof Carl Joseph Eberth found the organism in the abdominal lymph nodes and spleens of people from the town of Ztirieh (I cannot find this town on the map now) who had died in an outbreak of typhoid in the winter of 1879, and described his work in two papers published in Virchows Archiv in July 1880 and March 1881 (both in German and behind a paywall).

Other scientists had also been working to discover the microorganism that was the cause of typhoid fever. Perhaps the closest in terms of timing was the German-Swiss pathologist Prof Edwin Klebs (who discovered Corynebacterium diphtheriae and in honour of whom Klebsiella was named after him), who published his findings in a lengthy article in Archiv für experimentelle Pathologie und Pharmakologie in 1881.

The introduction to the article was telling (“After I had briefly summarized the results of our experience in the local institute on the organisms of ileotyphus, the work of Eberth (Virchow’s Archiv, vol. 81, pp. 581) appeared on the same subject. In spite of many differences in detail, both series of investigations, which were carried out independently of one another, are not only contradictory, but on the contrary, they support each other and complement each other. For the proof of dessert I give the following illustrations with explanatory text, which contain only a part of the drawings accumulating in the course of our several years of continuous investigation. Only after the repeated and same discovery had given us some certainty that this was no longer a coincidental incidental finding, did we dare to make public these histological observations.”).

Unfortunately, the genus “Eberthella” did not last. In circumstances that are unclear to me, Eberthella typhi or Eberthella typhosa was reclassified as Salmonella typhi; the genus name Salmonella having been created in 1900 in honour of American veterinary surgeon Dr Daniel Elmer Salmon, whose assistant Theobald Smith had found the bacterium later named Salmonella cholerasuis as the cause of hog cholera.